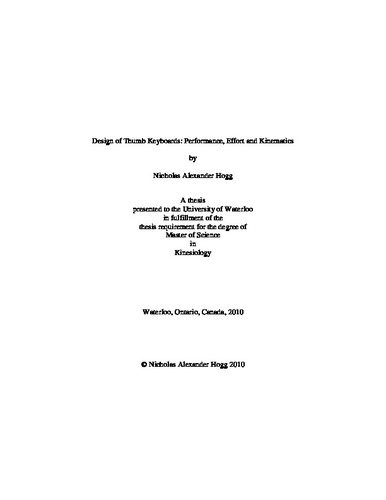 Mobile hand-held communication device (smart phone) use is very prevalent and growing rapidly. In addition, there is empirical support for heavy use to be associated with musculoskeletal disorders. This study therefore addressed the physical demand and performance when using these devices. The natural texting style for 20 participants was identified and then participants performed standardized static and dynamic tasks on 4 different types of mobile hand-held devices; a touch screen device and 3 devices with different keyboard sizes and layout; a flip or clamshell design, a PDA style device and a phone with a pull out QWERTY keyboard. Participants rated the effort required to complete each task and for dynamic tasks, keystroke speed was also measured. The time history of angles of the carpometacarpal, metacarpophalangeal and interphalageal joints of the thumb as well as motion of the wrist were determined using small surface makers and an optoelectronic motion capture system. Thumb kinematics were normalized to the maximum range of motion of each joint. Statistically significant and substantial differences were found for the dynamic condition: The tasks which required the most motion in the flexion/extension axis of the thumb also required the most effort, and that there is an inverse relationship between effort and typing speed, namely that those tasks, or devices which required the highest effort resulted in the lowest typing speeds, and visa-versa. Similarly, results showed that those static tasks which required the most thumb flexion also required the most effort. Overall, use of the touch screen phone required the least effort for dynamic and static tasks, and also resulted in the highest typing speeds. This could be a result of having the lowest force required to engage the keys. The device which resulted in the lowest typing speed and highest required effort was the flip phone, which also had the highest required force to engage the keys. There was also a weak relationship between user thumb length and required effort, with longer thumb length necessitating a greater about of effort. Those subjects who used the texting style indentified as the slide style which used forearm rotation with a less flexed thumb reported significantly less effort for all tasks than those who used the claw style which used extreme flexion of the thumb joints. However, texting style had no significant effect on typing speed, indicating that someone could adopt the slide style to reduce muscular effort and potentially the risk of developing musculoskeletal disorders in the upper limbs and neck without sacrificing performance.