The Redevelopment of Canada and Japan’s Economic Relationship, 1945-1951: Canadian Perspectives 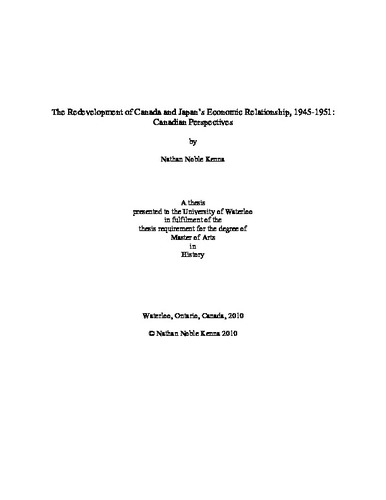 Between 1921 to 1941, Canada and Japan were close trading partners. The end of World War II provided the two countries with the opportunity to resume their former economic relationship. However, Japan was a defeated country, lacking in resources and credit, and subject to the Occupation led by the Supreme Commander of the Allied Powers. In contrast, Canada was left with a strong economy and political independence. In 1945, Canada was invited to participate in the Far Eastern Advisory Commission that later became the Far Eastern Commission in 1946. In August 1946, Canada established a Liaison Mission at its former Legation in Tokyo. Using archival material, this study explores how trade was conducted between 1945-1951 and explains how Canada and Japan redeveloped their economic relationship during the challenging years of Occupied Japan.