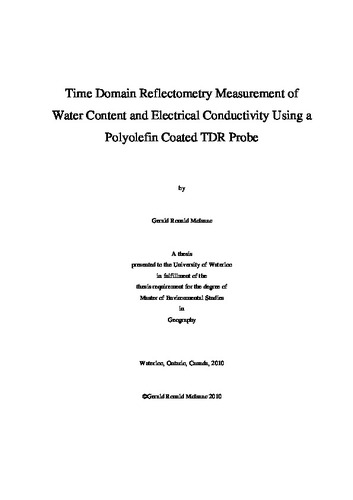 The use of time domain reflectometry (TDR) to determine water content (θv) from the measurement of the apparent dielectric constant (Ka) or the square root of the apparent dielectric constant (Ka 0.5) in highly saline environments has been limited due to the dampening effect that electrical conductivity (EC) has on the TDR signal. The objective of this research was to evaluate the use of a three-rod TDR probe with a polyolefin coating on the center-conducting rod (CCRC probe) to simultaneously measure θv and EC in saline conditions where standard, non-coated TDR probes (NC probe) are ineffective. The application of a 0.00053 m thick polyolefin coating on the center-conducting rod of a CS605 TDR probe increased the capability of the probe to measure θv at EC levels as high as 1.06 S m-1 compared to 0.132 S m-1 for a NC CS605 probe. The CCRC probe was found to be incapable of determining any difference in EC levels. A 0.01 m long section or “gap” at the center of the polyolefin coating on the center conducting rod (GAP probe) was cut from the polyolefin coating to expose a section of the stainless steel center-conducting rod to allow direct contact with the material being sampled. The GAP probe was found to be capable of measuring θv and EC at EC levels as high as 0.558 S m-1. Using a water-air immersion method, a comparison between the NC probe and the CCRC and GAP probes was undertaken. The correlation between θv vs. Ka 0.5 was found to be linear for all three probes with the slope (m) of the regressed equation for the NC probe (m = 7.71) being approximately twice that of the CCRC probe (m = 4.25) and the GAP probe (m = 4.36). The intercept values were equivalent for all three probes. The linearity between θv vs. Ka 0.5 for the NC and CCRC probes using the water-air immersion method was also observed when the probes were used to measure Ka 0.5 of different sand-water mixtures. The slope of regressed equation for the NC probe in the sand-water iv mixtures (m = 7.69) was equivalent to the water-air immersion slope for the NC probe, however the intercept values for the sand-water mixtures was lower than the intercept values for the water-air immersion method. Similarly, the slope of the CCRC probe in the sand-water mixtures (m = 5.00) was equivalent to the CCRC probe water-air immersion slope. Calculated Ka 0.5 values using a waterair dielectric-mixing model (WAMM) were equivalent to measured Ka 0.5 values for the NC probe. The water air immersion method was found to provide a suitable methodology for TDR research, however a more definitive test of the coated probe response in a series of soils with a range of homogenous water contents should be completed to ascertain the reliability of the water-air immersion method. The straightforward relationship between the inverse of TDR measured impedance (ZL -1) and EC provided an effective calibration method for both the NC and GAP probes. The use of the Giese- Tiemann method to establish a calibration curve for EC measurement was limited to a maximum EC level of 0.132 S m-1 for the NC probe. The use of the cell constant method was considered to be unacceptable as a means of developing a calibration curve due to the fact that the cell constant K was not a constant value. Ka 0.5 values for the CCRC and GAP were consistently less than Ka 0.5 values for the NC probe at all qv levels except θv = 0.000 m3 m-3 or 100% air. The difference in Ka 0.5 (DKa 0.5) between the NC probe and the CCRC and GAP probes was seen to increase with increasing water content. Similarly, a measurable effect was found between the TDR waveforms for the NC probe when the probe head was surrounded completely by air when compared to the TDR waveforms for the NC probe when the probe head was completely surrounded by water. Modeled electrostatic fields for the NC and CCRC CS605 TDR probes displayed a decrease in the electric potential and electric field intensity in the region outside of the polyolefin coating of the CCRC probe compared to the NC probe. The decrease v in potential and electric field intensity became greater when the dielectric constant of the material surrounding the CCRC probe increased. The use of a polyolefin coating on the center-conducting rod with a small section of the coating removed at the midsection of rod provides an effective means of extending the application of TDR θv and EC measurement in saline environments where standard TDR probes cannot be used.