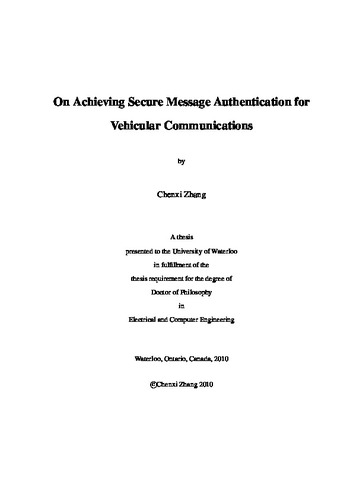 Vehicular Ad-hoc Networks (VANETs) have emerged as a new application scenario that is envisioned to revolutionize the human driving experiences, optimize traffic flow control systems, etc. Addressing security and privacy issues as the prerequisite of VANETs' development must be emphasized. To avoid any possible malicious attack and resource abuse, employing a digital signature scheme is widely recognized as the most effective approach for VANETs to achieve authentication, integrity, and validity. However, when the number of signatures received by a vehicle becomes large, a scalability problem emerges immediately, where a vehicle could be difficult to sequentially verify each received signature within 100-300 ms interval in accordance with the current Dedicated Short Range Communications (DSRC) protocol. In addition, there are still some unsolved attacks in VANETs such as Denial of Service (Dos) attacks, which are not well addressed and waiting for us to solve. In this thesis, we propose the following solutions to address the above mentioned security related issues. First of all, to address the scalability issues, we introduce a novel roadside unit (RSU) aided message authentication scheme, named RAISE, which makes RSUs responsible for verifying the authenticity of messages sent from vehicles and for notifying the results back to vehicles. In addition, RAISE adopts the k-anonymity property for preserving user privacy, where a message cannot be associated with a common vehicle. Secondly, we further consider the situation that RSUs may not cover all the busy streets of a city or a highway in some situations, for example, at the beginning of a VANETs' deployment period, or due to the physical damage of some RSUs, or simply for economic considerations. Under these circumstances, we further propose an efficient identity-based batch signature verification scheme for vehicular communications. The proposed scheme can make vehicles verify a batch of signatures once instead of one after another, and thus it efficiently increases vehicles' message verification speed. In addition, our scheme achieves conditional privacy: a distinct pseudo identity is generated along with each message, and a trust authority can trace a vehicle's real identity from its pseudo identity. In order to find invalid signatures in a batch of signatures, we adopt group testing technique which can find invalid signatures efficiently. Lastly, we identify a DoS attack, called signature jamming attack (SJA), which could easily happen and possibly cause a profound vicious impact on the normal operations of a VANET, yet has not been well addressed in the literature. The SJA can be simply launched at an attacker by flooding a significant number of messages with invalid signatures that jam the surrounding vehicles and prevent them from timely verifying regular and legitimate messages. To countermeasure the SJA, we introduces a hash-based puzzle scheme, which serves as a light-weight filter for excluding likely false signatures before they go through relatively lengthy signature verification process. To further minimize the vicious effect of SJA, we introduce a hash recommendation mechanism, which enables vehicles to share their information so as to more efficiently thwart the SJA. For each research solution, detailed analysis in terms of computational time, and transmission overhead, privacy preservation are performed to validate the efficiency and effectiveness of the proposed schemes.