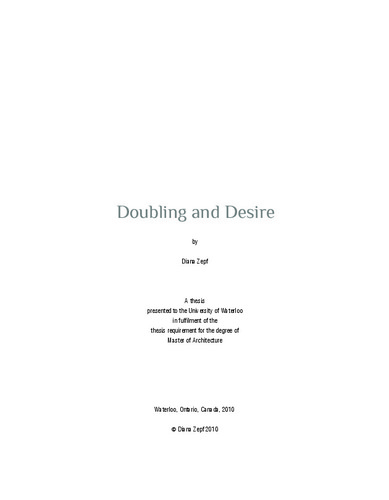 This thesis proposes that an investigation into the phenomenon of doubling may engage architecture with a type of desire that has deep rooted connections with the complexities of human nature, with the very human condition of desiring to know who/what/where/when/how we are. It proposes that an experience of doubling is suggestive of a specific kind of affective space that tests this relationship, expanding into the interval we have formed between our body, its being and space. The proposal is to explore the material, spatial, and psychological characteristics of such a phenomenon - to understand the virtual space created through this doubling and its architectonic characteristics. The design ambition of this thesis is to construct an architectural fiction that engages with this doubling. If architecture has the capacity to embody the ambitions and anxieties of society, the work produced attempts to invoke, through choreographed doublings manifested by the movement of figure and light through constructions in time, that human condition of desire that is concerned with finding/defining itself in the unknown, not to provide an answer for what the unknown is, but to engage with its enigmatic nature. By engaging in the protean dynamics of doubling and desire, this thesis attempts to poeticize the interval between the body and its built environment.