What helps or hinders the adoption of "good planning" principles in shrinking cities? A comparison of recent planning exercises in Sudbury, Ontario and Youngstown, Ohio 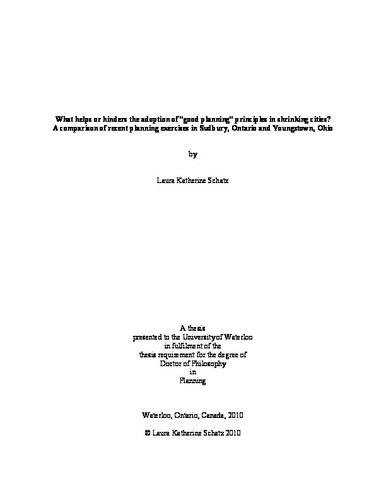 Much attention is paid to the increasing number of people living in cities while a relatively understudied but related phenomenon is silently gaining strength: that of “shrinking cities.” In the context of massive economic restructuring and increasing globalization, a growing number of cities in industrialized countries such as the United States and Canada are experiencing a population decline. The usual approach of planners in shrinking cities is either to do nothing or to focus on “growing” their cities to previous population levels. To date, both approaches have been largely unsuccessful. This leads to the question I ask in this thesis: What are other possible approaches to planning besides a population and economic growth orientation that might be successfully implemented in shrinking cities? A small but growing number of shrinking cities researchers are encouraging planners in shrinking cities neither to focus on growth nor to ignore decline but to focus on planning to meet the needs of the remaining population. While improving the quality of life of existing residents should be the goal of planners in all cities – growing or declining – what is different about this approach in the context of shrinkage is the belief that shrinking cities can offer a high quality of life. In this thesis, I use four general principles of “good planning” in shrinking cities, collected from the literature, as a point of departure for comparing the recent planning exercises in two shrinking cities: Youngstown, Ohio (which has begun to tackle the issues of population decline in a way that is ostensibly resembles the principles of good planning) and Sudbury, Ontario (which has opted for the traditional “growth is the only option” approach). Based on a mix of quantitative and qualitative data, I find that the principles of “good planning” for shrinking cities are in practice difficult to achieve. Whether or not planners in shrinking cities will decide to adopt these principles is influenced by a number of factors, including the presence or absence of young, innovative leadership, levels of devolution and autonomy, current fiscal structures, local economic structure, and political dynamics.

Laura Katherine Schatz (2010). What helps or hinders the adoption of "good planning" principles in shrinking cities? A comparison of recent planning exercises in Sudbury, Ontario and Youngstown, Ohio. UWSpace. http://hdl.handle.net/10012/5199