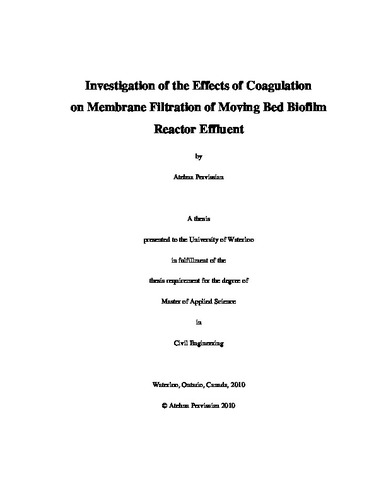 The combination of moving bed biofilm reactors and membrane bioreactors (MBBR-MR) can compensate for the drawbacks of both of these systems and further increase their acceptance and application in wastewater treatment industries. Despite the potential benefits of a MBBR-MR technology there has only been limited study of this configuration. The present study consisted of an overall assessment of the performance of a combined MBBR-MR system under high and low loading rates. Since colloidal matter in mixed liquor suspended solid (MLSS) is considered as one of the important contributors to membrane fouling, pre-treatment of membrane feed by coagulation was investigated for improving membrane performance. The performance of the MBBR-MR was assessed based on its chemical oxygen demand (COD) removal efficiency and membrane fouling mechanisms. The study was carried out using pilot-scale MBBR and bench-scale batch membrane filtration setups (Millipore Inc. Bedford, MA). The pilot MBBR had a working volume of 1.8 m3 and a 30% carrier fill fraction. The MBBR was operated with loading rates of 160 ± 44 g/m2/d (hydraulic residence time (HRT) of 4.6 h) and 223 g/m2/d (HRT of 2.6 h). The MBBR feed was obtained from a starch recovery line in a potato chip processing factory. The carriers were mixed by coarse bubble aeration and the dissolved oxygen (DO) was maintained above 2 mg/l. Preliminary jar test trials (based on turbidity removal) were performed in order to obtain an optimal dosage of coagulants for subsequent ultrafiltration (UF) tests. The efficiency of three coagulants (alum, ferric chloride and a blend of polyaluminum chloride and polyamine) was evaluated. The membranes were composed of polyethersulfone (PES) and had a pore size of 0.05 microns. The results of this study indicate that the combination of MBBR with membrane filtration can be operated at relatively high loading rates to yield a constant high quality permeate that is suitable for water reuse purposes. Fouling of the membrane by the wastewater was found to be substantially reduced by treatment with the MBBR. The reversible and irreversible fouling of the MBBR effluent were 56 and 63%, respectively, of that observed with the raw wastewater. The MBBR Loading-rate was found to affect treatment efficiency of the MBBR-MR and membrane performance. Operation under the elevated loading-rate conditions HRT = 2.6 hours) resulted in an increase in the irreversible fouling of the membranes (60% on average). The addition of all the coagulants in this study was found to decrease the fouling of the membrane. However, the extent of the pre-coagulation effect on membrane fouling was found to strongly depend on the type and dosage of the coagulant and the MBBR effluent characteristics. All the coagulants were effective in decreasing membrane fouling at their optimal dosages which was determined in preliminary jar tests. Ferric chloride performed the best as a pretreatment coagulant compared to alum (Aluminum sulfate) and the coagulant blend with reductions in both reversible and irreversible fouling (43-86% and 51-71%, respectively) and increased consistency (in decreasing fouling) as compared to the other coagulants. Alum had no effect on irreversible fouling and the coagulant blend significantly increased irreversible fouling in some trials (up to 196% or by a factor of 3 when overdosed). Additionally, alum and the blend were, on average, 29% and 7%, less effective than ferric chloride in reducing reversible fouling under the conditions and dosages tested.