A Model Based Approach to Apraxia in Parkinson's Disease 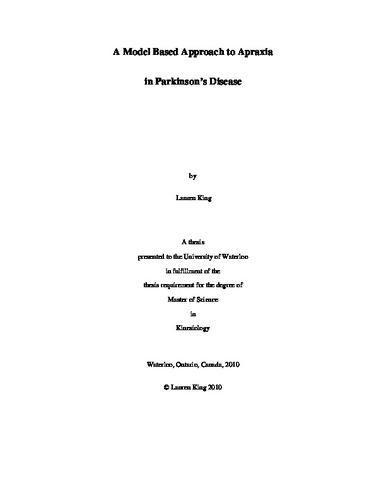 This thesis provides new insight into how learned skilled movements are affected in a disease with basal ganglia damage, within what task demands these deficits can be detected, and how this detection can occur within the constraints of primary motor symptoms. Hence the purpose of this thesis was threefold. Firstly, the aim was to take a model-based approach to apraxia in PD, in order to determine the nature of the errors in reference to other populations that experience apraxia. Apraxia by definition cannot be the product of primary motor deficits, weakness, sensory loss, or lack of comprehension, therefore the second objective of the study was to detect apraxia while remaining true to these prerequisites. The third objective was to extend the examination of apraxia beyond the upper limbs, and investigate the relationship between upper limb and lower limb apraxia, as well as the relationship between freezing (which shares similarities with gait apraxia) and upper limb and lower apraxia. Overall, the most common pattern of apraxia identified in this PD group was impairment at both pantomime and imitation, suggesting issues with executive function. However, there are other results that suggest an issue with visuomotor transformation may be superimposed on this executive function deficit, including a higher frequency of participants impaired at imitation and a very pronounced impairment at meaningless gestures. To ensure that these deficits are not the product of primary motor symptoms, correlation analyses were conducted between gestural impairment and total motor impairment, cardinal symptom impairment, and degree of asymmetry of these symptoms. While there was a significant correlation of total motor severity and gestural impairment, there were no significant correlations between cardinal motor symptoms and total gestural impairment, or limb specific gestural impairment and the degree of motor asymmetry. These results indicate that the outward manifestation of primary motor symptoms does not necessarily correspond with gestural impairment, however the overall relationship (total UPDRS) hints to an indirect influence of the basal ganglia on healthy praxis. With regards to the third objective, the lower limb assessment turned out to be very consistent with the results yielded in the upper limb assessment. While there were similar frequencies of impairment in both pantomime and imitation, the upper limb and lower limbs assessments were found to correlate very strongly. This is a promising result, because the lower limb battery is easy to administer, there are typically less motor symptoms to deal with, and preliminary analyses show a high inter-rater reliability established. Furthermore, there was a higher proportion of freezers with apraxia compared to non-freezers, and this is the first study to reveal this. All these results taken together are evidence of similar underlying mechanisms for these impairments (upper limb apraxia, lower limb apraxia, and freezing). The model-based approach to studying apraxia in both the upper and lower limbs of PD, enables us to determine the frequencies, patterns and severities of apraxia, and better equips us to predict which systems are more susceptible to deterioration. This thesis project has hopefully created a framework for determining coping strategies and future interventions for apraxia, specifically in basal ganglia disordered populations.