Characterization of the Self-Assembly of Pyrene-Labelled Macromolecules in Water 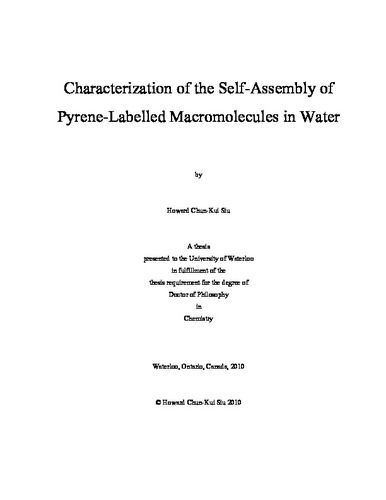 The self-assembly of several pyrene-labelled amphiphilic macromolecules in water was characterized by fluorescence. Information on their self-assembly was obtained by monitoring the level of pyrene aggregation in solution. A measure of the level of association was obtained by determining the fraction of aggregated pyrene of the labelled macromolecules from the global analysis of their monomer and excimer fluorescence decays. Global analysis limits the degrees of freedom of the analysis thus reducing the error on the parameters retrieved from the analysis. Extensive developments in the global analysis of the pyrene monomer and excimer decays enabled the first characterization of the molar absorbance coefficient of the pyrene aggregates formed by aqueous solutions of pyrene-labelled poly(N,N-dimethylacrylamide) (PyPDMA) and poly(ethylene oxide) (PyPEO). The molar absorbance coefficients of the pyrene aggregates determined for PyPDMA and PyPEO were both found to be broader and red-shifted compared to that of unaggregated pyrene. These results agree with observations found in the scientific literature made by using absorption and excitation fluorescence measurements. Attempts to determine the molar absorbance coefficient of pyrene-labelled hydrophobically-modified alkali-swellable emulsion (PyHASE) polymers were unsuccessful. The inability to characterize the pyrene aggregates of PyHASE was attributed to the greater complexity of the PyHASE polymer compared to PyPDMA and PyPEO. For these simpler pyrene-labelled polymers, a protocol has been established which uses the global analysis of the pyrene monomer and excimer decays to determine quantitatively the level of association of pyrene-labelled polymers as well as the molar absorbance coefficient of their aggregates. Changes in the level of aggregation of pyrene-labelled lipids (PLLs) having head groups bearing an alcohol (PSOH) or imido diacetic acid (PSIDA) embedded in 1-palmitoyl-2-oleyl-3-sn-phosphatidylcholines (POPC) or distearylphosphatidylcholine (DSPC) liposomes were probed by fluorescence. Distribution of the PLLs in the fluid POPC membrane was found to be homogeneous while the PLLs phase-separated into amorphous channels created in the DSPC membranes. Multivalent cations Cu2+ and La3+ were found to bind to PSIDA, hindering diffusional encounters between unaggregated PSIDA but leaving the PLL aggregates intact. Using the fluorescence quenching ability of Cu2+, the viscosity of the amorphous channels of the DSPC membrane was determined to be about six times greater than that of the more fluid POPC membrane. Simultaneous rheological and fluorescence measurements were achieved by interfacing a rheometer with time-resolved and steady-state fluorometers using fiber-optic cables. This joint set up enabled the simultaneous rheological and fluorescence measurements of PyHASE solutions having concentrations ranging from 0.5 w/w% to 5 w/w%. The level of association of the PyHASE solutions was tracked using fluorescence at shear rates of 0, 0.1 and 100 s–1. Despite the presence of shear thinning leading to viscosity drops of up to four orders of magnitude, no change in the fluorescence and hence the level of association was observed. The lack of change in level of association implied that the mechanism of shear thinning is due to a switching from inter- to intramolecular association rather than a drop in the level of association. This information will prove useful for future models attempting to predict the rheological behaviour of sheared associative polymers.