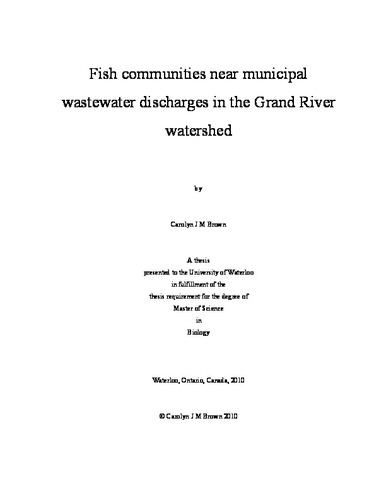 Municipal wastewater effluent (MWWE) has the potential for aquatic degradation, as it is the largest, per volume, anthropogenic discharge in Canada and other areas in the world. With an increasing population in many areas, such as Southern Ontario, there is concern that infrastructure of wastewater treatment facilities will not be able to maintain adequate treatment and prevent further degradation of the environment. The Grand River watershed, in Southern Ontario, is predicted to have its population increase to 1.2 million people by 2031 (from 780,000 people in 2001). Although wastewater treatment has improved, concern remains for receiving environments due to inadequate treatment (i.e. Kitchener) and minimal dilution (i.e. Guelph). This research was conducted to understand current impacts of MWWE in the Grand River watershed on fish communities to support future management and protection. Study sites upstream and downstream were chosen for their proximity to the Guelph, Kitchener, and Waterloo MWWE outfalls, similarity in habitat, and wadeability. Habitat analysis indicated that there were no large physical differences among sites. Fish communities were collected in a standardized method with a backpack electroshocker at each site (six randomly selected 10 m by 10 m sub-sites for 5 min). Greenside Darter (Etheostoma blennioides) and Rainbow Darter (E. caeruleum), the most abundant species, were also analyzed for stable isotope signatures (δ13C and δ15N) at each site. Downstream of the Guelph outfall there were no changes in mean total catch per unit effort (CPUE) or mean total mass. Changes to diversity, resilience, and tolerance in the fish community were attributed to a decreased abundance of Greenside Darter and increased abundance of Rainbow Darter. Downstream of the Kitchener discharge, there was a trend towards decreasing mean total CPUE, especially for darter species, and an increase in mean total mass due to a community shift to larger species including Catostomids and Centrarchids. The changes in abundance of Rainbow Darter, Catostomids, and Centrarchids among reference and Kitchener MWWE exposed sites explained the pattern in resilience, tolerance, and diet classifications. Lower diversity downstream of all three MWWE outfalls can be attributed to the increase in Rainbow Darter abundance. Stable isotope signatures (δ13C and δ15N) of Greenside Darter did not change downstream of the Guelph and Waterloo discharges, but signatures of Rainbow Darter increased immediately below the two outfalls. This shift may be due to the Rainbow Darter being able to take advantage of a change in the environment (i.e. food availability), resulting in its increased abundance and changes in isotopic signature. Directly downstream of the Kitchener outfall both darter species had an increase in δ13C and a large decrease in δ15N, likely due to high nutrient inputs from the outfall. The Kitchener wastewater discharge is also associated with a decrease in abundance of fish and a shift in community structure. MWWEs are currently affecting the aquatic environment, including fish communities in the Grand River watershed. Future investments in infrastructure and watershed management should be made to mitigate degradation of water quality in this watershed.