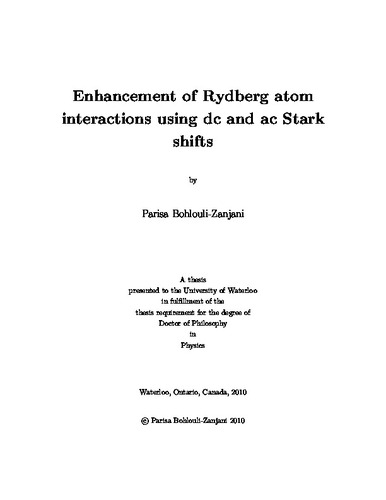 This thesis reports the use of both dc and ac electric fi eld induced resonant energy transfer, RET, between cold Rydberg atoms as a useful tool for enhancement of interatomic interactions. A general technique for laser frequency stabilization and its suitability for Rydberg atom excitation is also demonstrated. RET between cold Rydberg atoms was used to determine Rydberg atom energy levels. The ⁸⁵Rb atoms are laser cooled and trapped in a magneto-optical trap. For energy level determination experiment, atoms were optically excited to 32d₅/₂ Rydberg states. The two-atom process 32d₅/₂ + 32d₅/₂ → 34p₃/₂+30g is resonant at an electric fi eld of approximately 0.3 V/cm through dipole dipole interaction. The experimentally observed resonant fi eld, together with the Stark map calculation is used to make a determination of the ⁸⁵Rb ng-series quantum defect to be ⵒg(n = 30) = 0.00405(6). The ac Stark eff ect was also used to induce RET between cold Rydberg atoms. When a 28.5 GHz dressing field was set at speci fic fi eld strengths, the two-atom dipole-dipole process 43d₅/₂ + 43d₅/₂ → 45p₃/₂ + 41f was dramatically enhanced, due to induced degeneracy of the initial and final states. This method for enhancing interactions is complementary to dc electric- field-induced RET, but has more flexibility due to the possibility of varying the applied frequency. At a dressing field of 28.5 GHz all of the participating levels (43d₅/₂, 45p₃/₂ and 41f) show signi cant shifts and these give a complicated series of resonances. An oscillating electric fi eld at 1.356 GHz was also used to promote the above RET process where the atoms are initially excited to the 43d₅/₂ Rydberg states. The ac fi eld strength was scanned to collect RET spectra. Di fferent resonances were observed for diff erent magnetic sublevels involved in the process. Compared to the higher dressing field frequency of 28.5 GHz, the choice of dressing frequency of 1.356 GHz, which is slightly blue detuned from the 41f - 41g transition, and structure of the spectra may be understood, by analogy with the dc field case.