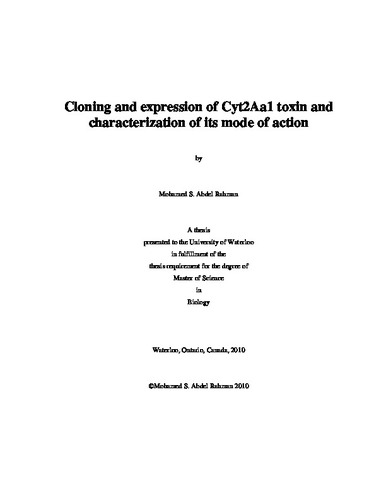 The discovery of the pore-forming toxins produced by Bacillus thuringiensis, which are toxic to insects but not to mammalians, has provided a new successful means to control harmful plant-feeding insects biologically. The toxins are also used on insects that don’t feed on plants, for example on Anopheles. The Bacillus thuringiensis toxins fall into two structural families, named cry and cyt. All of these toxins act by damaging the cell membranes in the mid gut of the insect. In this study, a reliable system for expression and purification of the recombinant Cyt2Aa1 toxin has been developed. The recombinant Cyt2Aa1 toxin has been produced, characterized, followed by the construction of the cysteine mutants V186C and L189C by site directed mutagenesis. The new expression system yields 0.4 g of protein per litre of culture. The activated Cyt2Aa1 toxin is active in the hemolysis assay. Of note, the hemolytic activity of the V186C mutant exceeds that of wild type Cyt2Aa1 toxin and of the L189C mutant. Calcein release assay experiments have been done to examine the activity of the toxin with different artificial liposomes. It was found that Cyt2Aa1 toxin is very active with DMPC, DMPC+DMPG unilamellar liposomes. Surprisingly, however, Cyt2Aa1 toxin showed no activity with liposomes containing cholesterol. With both erythrocytes and sensitive liposomes, the toxin shows a “pro-zone effect”, that is the activity decreases at very high concentrations. The findings are discussed in the context of the toxin’s putative mode of action.

Mohamed S. Abdel Rahman (2010). Cloning and expression of Cyt2Aa1 toxin and characterization of its mode of action. UWSpace. http://hdl.handle.net/10012/5185