Bio-optical Modeling of Aquatic Photosynthesis in the Laurentian Great Lakes 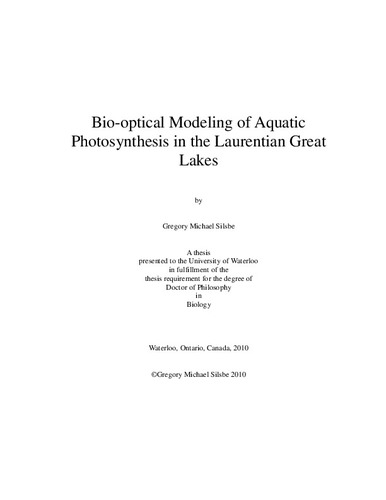 The methodology of phytoplankton production measurements in the Laurentian Great Lakes and other freshwater lakes has remained largely unchanged in the past 40 years. In most studies photosynthesis from a single water sample is measured across an in vitro light gradient usually using an artificial light source then extrapolating to the in situ environment. These traditional methods are laborious, thus limiting the amount of observations in space and time, and may not accurately represent in situ photosynthesis. Active chl a fluorescence, intrinsically linked to photosynthesis, can be measured in situ and instantaneously. Various bio-optical models that scale these fluorescence measurements to phytoplankton production are gaining widespread attention in the marine environment but have not been extensively tested in freshwater ecosystems. The methodology and efficacy of the various bio-optical models are tested in this thesis using a large dataset of active fluorescence profiles and ancillary water chemistry parameters against synchronously derived in vitro phytoplankton production collected across mixing, trophic and taxonomic gradients in Lake Erie. From this analysis, the most common bio-optical model parameterization yields photosynthetic rates that are largely incongruent with in vitro measurements. Bio-optical models are largely a function of two parameters, the absorption spectrum of photosystem II (aPSII) and the photochemical efficiency of PSII (fPSII). In Lake Erie fPSII is relatively constrained suggesting that even nutrient limited phytoplankton achieve balanced growth by adjusting the supply of energy through changes in light harvesting (aPSII) to match the demand for photosynthetic energy. This thesis goes on to demonstrate the success of bio-optical models depends largely on the formulation of aPSII. Alternative methods to derive aPSII, largely ignored in published bio-optical models, are reviewed, formulated, and when incorporated into a bio-optical model and compared to synchronous in vitro production measurements, this novel bio-optical model outperforms all other comparative studies performed across a taxonomic gradient.