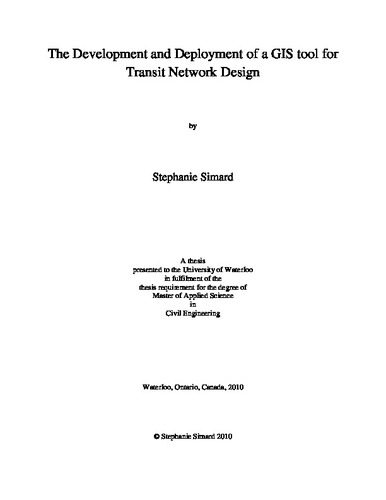 Public transportation contributes to sustainable transportation in urban areas. Unfortunately, in some cases public transit systems have been underperforming. Over the years, factors such as urban sprawl and the increase in private vehicle ownership have led to challenges for public transportation providers. The lack of investment in transit infrastructure has resulted in transit agencies being under resourced which further limit the agencies’ ability to respond. Realizing the need to change and move towards a more sustainable and balanced transportation system, governments have begun to invest more and more in transportation infrastructure projects. In order to encourage public transportation, focus has shifted to improving the quality of transit service being provided. There are many ways in which transit improvements can be made. The problem that describes the design of a public transportation network is referred to as the transit network design problem (TNDP). Much of the existing literature that addresses the TNDP describes methods that are rigorous and complex and have limited application in practice. Given the emergence of geographic information systems (GIS), there exists new opportunities to address the TNDP. This thesis presents a customized GIS tool that assists transit network design. The approach utilizes GIS to identify desire lines or major travel demand corridors from which trunk transit routes are proposed and evaluated. The GIS tool is built using VBA scripting in ArcMap 9.3 part of ESRI’s general ArcGIS suite but the underlying GIS functionality needed by the tool is not limited to ESRI software. The tool offers a proven methodology for use within transit network design and evaluation at a level of resource requirement that is consistent with most transit agencies. The tool has been customized to minimize the need for GIS training and to maximize its adaptability for application in multiple cities. The analyst applying the tools must have substantial knowledge of local conditions. The tool is applied to the Regional Municipality of Waterloo, Ontario, Canada, at the TAZ (traffic analysis zone) level using population and employment data. A street network with corresponding posted speeds on each link and the location of signalized intersections were also used in the analysis. The results of the analysis depicted major flows throughout Kitchener, Waterloo and Cambridge. Unique flows from students, major employers and an analysis of average income levels also provide input into the major demand corridors. From these results seven high order transit routes were designed to accommodate the major demand corridors. From the results it was found that GIS can be used to depict major demand corridors and inform transit network design. GIS is an excellent tool that can display complex information and visually identify spatial patterns. Further research includes the development of a model that evaluates network alternatives or the development of quantitative methods by which limits on aggregation can be automated.

Stephanie Simard (2010). The Development and Deployment of a GIS tool for Transit Network Design. UWSpace. http://hdl.handle.net/10012/5182