The Impact of Gaming on Rural Heritage Communities: A Case Study of Elora, Ontario 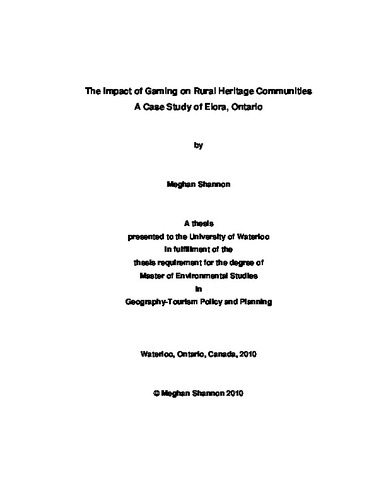 Since the early 1990s, rural decline has led many communities to begin social and economic restructuring. Several locales are seeking alternative approaches to the primary sector to support their declining industrial base (Markey et al, 2008). The tourism industry is an alternative to traditional rural livelihoods. Rural amenities and scenic landscapes have encouraged stakeholders to develop heritage tourism. The commodification of heritage has a profound impact on the place identity of rural landscapes. This is illustrated in the Model of Creative Destruction. In an earlier paper, Mitchell (1998) described the process of creative destruction through 5 stages being early commodification, advanced commodification, early destruction, advanced destruction and post destruction. In later papers, Mitchell and Vanderwerf (2010) describe the model as one that predicts that rural landscapes may evolve through three identities; rural town-scape, heritage-scape (or heritage village) and leisure-scape. Communities will remain as heritage-scapes if the desire to preserve is a dominant motivation. In contrast, if stakeholders are motivated more by a desire to profit or promote economic growth, then investments in non-conforming venues may result. This ultimately will shift the identity from one of heritage-scape to leisure-scape of mass consumption. Such investments may jeopardize a tourist’s heritage-seeking experience, and their perception of the community as a heritage village. Gaming recently has been introduced as a form of rural economic development in communities that commodify heritage (i.e. heritage-scapes). The introduction of slot machine parlours at racetracks (racinos) has helped combat the decline in the horse racing industry (Thalheimer and Ali, 2008). Furthermore, the positive economic impacts of these facilities are numerous. Negative implications, however, also accompany this type of tourism development. To date, little research has been conducted on the impacts that racino gaming developments have on communities, and, more specifically, on heritage-scapes. This thesis seeks to address this deficiency in a case study of Elora, Ontario and the Grand River Raceway. The purpose of this study was i) to determine the impact of the Grand River Raceway on Elora’s identity as a heritage village; ii) to identify the positive and negative socio-economic benefits that the facility has on the community and iii) to provide recommendations to communities who are considering similar development. To meet these objectives, data were collected through business and tourist surveys, unstructured interviews and a content analysis of secondary sources. Results suggest that the Grand River Raceway has not compromised Elora’s identity as a heritage-scape, in the eyes of business owners and tourists. Although the presence of the Grand River Raceway suggests that Elora is at the stage of early destruction or is on the way to becoming a leisure-scape, its presence has not detracted from visitor experience, as predicted by the model. This situation is attributed to marketing, location and uniformity with the existing landscape. Furthermore, the Grand River Raceway has had both positive and negative socio-economic impacts on Elora. Some of the benefits include employment, tax revenues, sponsorships and financial contributions to the municipality. At the same time, however, the Grand River Raceway has created a divided community, generated several legal issues and resulted in an uneven distribution of economic benefits. It is recommended that public consultation and resident involvement in decision making will help to minimize these negative impacts.