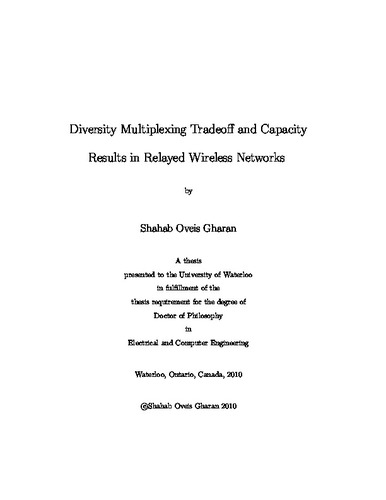 This dissertation studies the diversity multiplexing tradeoff and the capacity of wireless multiple-relay network. In part 1, we study the setup of the parallel Multi-Input Multi-Output (MIMO) relay network. An amplify-and-forward relaying scheme, Incremental Cooperative Beamforming, is introduced and shown to achieve the capacity of the network in the asymptotic case of either the number of relays or the power of each relay goes to infinity. In part 2, we study the general setup of multi-antenna multi-hop multiple- relay network. We propose a new scheme, which we call random sequential (RS), based on the amplify-and-forward relaying. Furthermore, we derive diversity- multiplexing tradeoff (DMT) of the proposed RS scheme for general single-antenna multiple-relay networks. It is shown that for single-antenna two-hop multiple- access multiple-relay (K > 1) networks (without direct link between the source(s) and the destination), the proposed RS scheme achieves the optimum DMT. In part 3, we characterize the maximum achievable diversity gain of the multi- antenna multi-hop relay network and we show that the proposed RS scheme achieves the maximum diversity gain. In part 4, RS scheme is utilized to investigate DMT of the general multi-antenna multiple-relay networks. First, we study the case of a multi-antenna full-duplex single-relay two-hop network, for which we show that the RS achieves the optimum DMT. Applying this result, we derive a new achievable DMT for the case of multi-antenna half-duplex parallel relay network. Interestingly, it turns out that the DMT of the RS scheme is optimum for the case of multi-antenna two parallel non-interfering half-duplex relays. Furthermore, we show that random unitary matrix multiplication also improves the DMT of the Non-Orthogonal AF relaying scheme in the case of a multi-antenna single relay channel. Finally, we study the general case of multi-antenna full-duplex relay networks and derive a new lower-bound on its DMT using the RS scheme. Finally, in part 5, we study the multiplexing gain of the general multi-antenna multiple-relay networks. We prove that the traditional amplify-forward relaying achieves the maximum multiplexing gain of the network. Furthermore, we show that the maximum multiplexing gain of the network is equal to the minimum vertex cut-set of the underlying graph of the network, which can be computed in polynomial time in terms of the number of network nodes. Finally, the argument is extended to the multicast and multi-access scenarios.