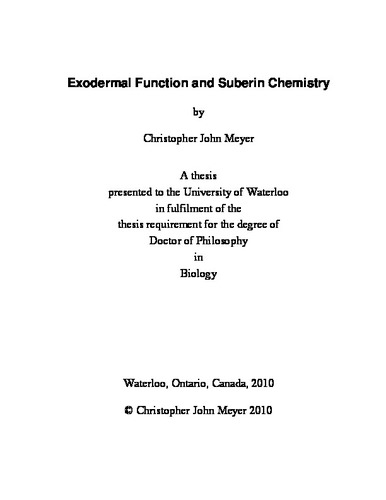 The thesis work concerns the multiseriate exodermis (MEX), an outermost cortical layer (two or more cell layers thick) characterized by Casparian bands and suberin lamellae. Diverse aspects of Iris germanica's MEX were examined including its maturation under differing growth conditions, and how this maturation affected water and solute permeability. Also, suberin metabolite profiles for the maturing MEX of I. germanica and the maturing uniseriate exodermis of Allium cepa were established. This multidisciplinary approach resulted in a comprehensive understanding of how anatomical and biochemical changes to the exodermis affect water and solute permeability of the MEX. Most previous studies of exodermal development have involved species with a uniseriate exodermis. To extend this work, the MEX in I. germanica roots was investigated. The outermost exodermal layer matured first with normal Casparian bands and suberin lamellae. But as subsequent layers matured, the Casparian band extended into the tangential and anticlinal walls of their cells. This atypical Casparian band was continuous around the root circumference. MEX maturation was influenced by the roots' growth medium. Plants were grown in soil or hydroponics (with and without a humid air gap), and their roots were sectioned and stained with various dyes to detect Casparian bands and suberin lamellae. In soil-grown roots, the exodermis started maturing (with concurrent deposition of Casparian bands and suberin lamellae) 10 mm from the root tip, and two layers had matured by 70 mm. In hydroponically grown roots, exodermal maturation was delayed. However, in basal regions exposed to an air gap in the hydroponic tank, maturation of the second exodermal layer was accelerated. Therefore, changes in growth conditions have striking effects on exodermal maturation in I. germanica. With respect to radial water and solute transport, I. germanica roots with a mature MEX had lower permeability rates compared with uniseriate exodermal roots or roots in which the endodermis represents the major transport barrier. Transport studies were conducted on completely submerged roots and air gap-exposed root regions using a pressure chamber whereby water permeability (Lppc) was measured quantitatively across the entire root. This instrument proved to be preferable because in large diameter roots (up to 2.5 mm in I. germanica), root hydraulics were affected by the large water storage capacity of the central cortex. Compared with regions of roots with no mature exodermal layers, the mature MEX reduced Lppc from 8.5 x 10-8 to 3.9 x 10-8 m s-1 MPa-1. Puncturing the MEX increased Lppc to 19 x 10-8 m s-1 MPa-1, indicating that the MEX is an important hydraulically resistant tissue. A root pressure probe was used to measure the permeability of roots to NaCl and ethanol; solute permeability was reduced in the presence of two mature MEX layers. The MEX of I. germanica should play an important role in survival under conditions of drought and salt stress. Suberin is a complex biopolymer with a poly(aliphatic) domain (SPAD) that, in the case of a suberin lamellae, is known to be located between the cell wall and plasma membrane. The location and lipophilic nature of the SPAD establishes it as a structure restrictive to radial water transport through the transcellular pathway. Synthesis of the SPAD in a maturing exodermis was not well understood. Hence, a suberin metabolite analysis during development was conducted on the maturing MEX of I. germanica grown in submerged and air gap hydroponic conditions. Suberin monomers of the soluble (unpolymerized) and insoluble (polymerized) fractions were chemically isolated, then quantified and identified by GC-MS. Interestingly, in air gap-exposed regions, there was an increased synthesis and deposition of insoluble SPAD monomers in the first two exodermal layers, compared with submerged regions. The SPAD fraction included fatty acids, α,ω-dioic acids, ω-OH fatty acids, and ferulic acid, with C18:1 α,ω-dioic acid and ω-OH fatty acid being the two most abundant monomers. Also, in tissue that matured in the air gap, the composition of the soluble fraction changed significantly among exodermal maturation stages and between growth conditions. Of particular significance, increased amounts of alkanes, the major component of waxes, accumulated in the first exodermal layer. Other monomers of the soluble fraction included fatty acids, fatty alcohols, and ferulic acid, that were SPAD biosynthetic precursors. It was postulated that the localized and abundant deposition of C18:1 α,ω-dioic acid and ω-OH fatty acid, along with high accumulation of intercalated waxes in the first mature exodermal layer, were more important than the overall number of suberized exodermal layers for reducing water loss from the root during drought. Lastly, hydroponically grown Allium cepa roots were used as models to analyze SPAD synthesis in a maturing uniseriate exodermis. Roots were divided into four maturation zones based on the growth rate and the deposition of suberin lamellae in maturing exodermal cells as determined by histochemical analyses. The chemical composition of the soluble fraction was essentially unchanged as the exodermis matured. In contrast, the SPAD composition differed during maturation, mainly due to significant increases in the deposition of C18:1 α,ω-dioic acids and C18:1 ω-OH fatty acids. It is proposed that the exodermal maturation zones with corresponding suberin metabolite profiles be used as targets for the functional enzymatic characterization of suberin biosynthetic pathways.