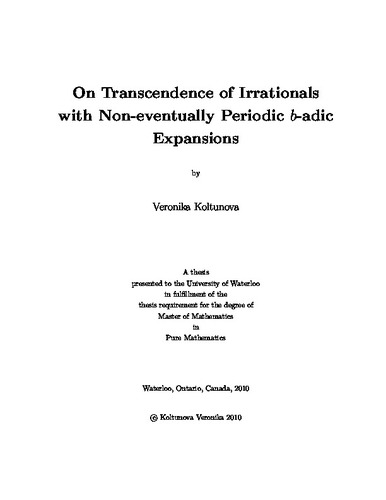 It is known that almost all numbers are transcendental in the sense of Lebesgue measure. However there is no simple rule to separate transcendental numbers from algebraic numbers. Today research in this direction is about establishing new transcendence criteria for new families of transcendental numbers. By applying a recent refinement of Subspace Theorem, Boris Adamczewski and Yann Bugeaud determined new transcendence criteria for real numbers which we shall present in this thesis. Published only three years ago, their articles explore combinatorial, algorithmic and dynamic approaches in discussing the notion of complexity of both continued fraction and b-adic expansions of a certain class of real numbers. The condition on the expansions are those of being stammering and non-eventually periodic. Taking together these articles give a well-structured picture of the interrelationships between sequence characteristics of expansion (i.e. complexity, periodicity, type of generator) and algebraic characteristics of number itself (i.e. class, transcendency).