Wireless Sensors and their Applications in Controlling Vibrations 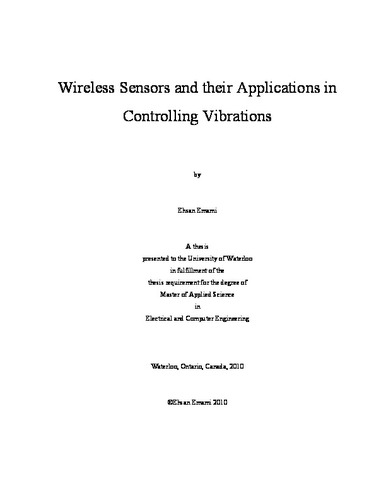 As wireless devices are becoming more powerful, more flexible and less costly to produce, they are often being applied in new ways. Combining wireless technology with new types of sensors results in the ability to monitor and control the environment in ways not previously possible. For example, an intelligent wireless sensor system that consists of a sensor, digital processor and a transceiver can be mounted on a board the size of a coin. The data collected by these devices are then transmitted to a central unit which is able to thoroughly process and store this data. Not only can the central processing station provide reports about certain physical parameters in the environment, it can also control the environment and other parameters of interest. The design process of these wireless sensor platforms is a well-developed area of research that covers concepts like networking, circuit design, Radio-Frequency (RF) circuits and antenna design. The design of a wireless sensor can be as simple as putting together a microcontroller, a transceiver and a sensor chip or as complicated as implementing all the necessary circuitry into a single integrated circuit. One of the main applications of the sensors is in a control loop which controls physical characteristics in an environment. Specifically, if the objective of a control system is to limit the amount of vibrations in a structure, vibration sensors such as accelerometers are usually used. In environments where the use of wires is costly or impossible, it makes sense to use wireless accelerometers instead. Among the numerous applications that can use such devices are the automotive and medical vibration control systems. In the automotive industry it is desirable to reduce the amount of vibrations in the vehicle felt by the passengers. These vibrations can originate from the engine or the uneven road, but they are damped using passive mechanical elements like rubber, springs and shocks. It is possible however, to have a more effective vibration suppression using active sensor-actuator systems. Since adding and maintaining wires in a vehicle is costly, a wireless accelerometer can be put to good use there. A medical application for wireless accelerometers can be used with a procedure called Deep Brain Stimulation (DBS). DBS is a relatively new and very effective treatment for advanced Parkinson’s disease. The purpose of DBS is to reduce tremors in the patients. In DBS a set of voltages is applied to the brain of the patient as some optimum combinations of voltages will have a very positive effect on the tremors. Those optimum voltages are currently found by trial and error while a doctor is observing the patient for tremors. Wireless accelerometers with the use of a computer algorithm can assist in this process by finding the optimum voltages using the feedback provided by the accelerometers. The algorithm will assist the doctor in making decisions and has the potential of finding the optimums completely on its own.