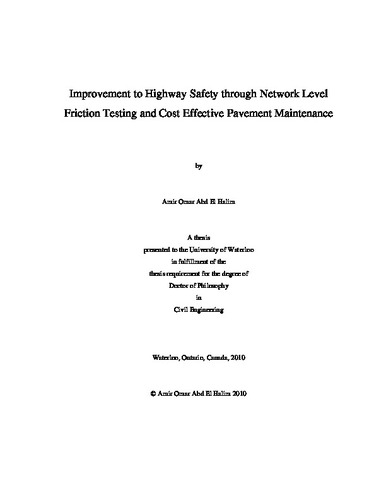 Pavements encompass a significant component of the total civil infrastructure investment. In Ontario, the Ministry of Transportation (MTO) is responsible for the maintenance and construction of approximately 39,000 lane-kilometres of highway. In 2004, the province estimated the value of the total highway system at $39 billion dollars. Thus, managing this asset is an important factor to ensure a high level of service to the traveling public. One of the most important indicators of level of service for a road network is safety. Each year, thousands of motorists across North America are involved in motor vehicle collisions, which result in property damage, congestion, delays, injuries and fatalities. The MTO estimated that in 2002, vehicle collisions in Ontario cost nearly $11 billion. Despite the importance of highway safety, it is usually not considered explicitly in the pavement management framework or maintenance analysis. A number of agencies across North America collect skid data to assess the level of safety at both the project and network level (Li et al, 2004). However, a number of transportation agencies still do not collect friction data as part of their regular pavement data collection programs. This is related to both liability concerns and lack of knowledge for how this data can be effectively used to improve safety. The transportation industry generally relies on information such as collision rates, black-spot locations and radius of curvature to evaluate the level of safety of an alignment (Lamm et al., 1999). These are important factors, but the use of complementary skid data in an organized proactive manner would also be beneficial. In preparation for a considered Long Term Area Maintenance Contract, a project was initiated by the MTO to collect network level friction data across three regions in the Province of Ontario. This project represents the first time friction data was collected at the network level in Ontario. In 2006, approximately 1,800 km of the MTO highway network was surveyed as a part of this study. This research utilized the network level skid data along with collision data to examine the relationships and model the impacts of skid resistance on the level of safety. Despite the value of collecting network level skid data, many Canadian transportation agencies still do not collect network level skid data due to the costs and potential liability associated with the collected data. The safety of highway networks are usually assessed using various levels of service indicators such as Wet-to-Dry accident ratio (W/D), surface friction (SN), or the collision rate (CR). This research focused on developing a framework for assessing the level of safety of a highway network in terms of the risk of collision based on pavement surface friction. The developed safety framework can be used by transportation agencies (federal, state, provincial, municipal, etc.) or the private sector to evaluate the safety of their highway networks and to determine the risk or probability of a collision occurring given the level of friction along the pavement section of interest. As a part of the analysis, a number of factors such as Region, Season of the Year, Environmental Conditions, Road Surface Condition, Collision Severity, Visibility and Roadway Location were all investigated. Statistical analysis and modeling were performed to developed relationships which could relate the total number of collisions or the collision rate (CR) to the level of available pavement friction on a highway section. These models were developed using over 1,200 collisions and skid test results from two Regions in the Province of Ontario. Another component of this study examined the Wet-to-Dry accident ratio and compared it to the Skid Number. A number of Transportation Agencies rely on the Wet-to-Dry accident ratio to identify potential locations with poor skid resistance. The results of the comparison further demonstrated the need and importance of collecting network level skid data. Another component of this study was to evaluate the effectiveness of various preservation treatments used within the Long Term Pavement Performance (LTPP) study. In addition, modeling was performed which examined the historical friction trends over time within various environment zones across North America to investigate skid resistance deterioration trends. The results of the analysis demonstrated that commonly used preservation treatments can increase skid resistance and improve safety. The cost effectiveness of implementing preservation and maintenance to increase the level of safety of a highway using Life Cycle Cost Analysis (LCCA) was evaluated. A Decision Making Framework was developed which included the formulation of a Decision Matrix that can be used to assist in selecting a preservation treatment for a given condition. The results of this analysis demonstrate the savings generated by reducing the number of collisions as a result of increasing skid resistance. The results of this research study have demonstrated the importance of network level friction testing and the impact of skid resistance on the level of safety of a highway. A review of the literature did not reveal any protocol or procedures for sampling or minimum test interval requirements for network level skid testing using a locked-wheel tester. Network level friction testing can be characterized as expensive and time-consuming due to the complexity of the test. As a result, any reduction in the required number of test points is a benefit to the transportation agency, private sector (consultants and contractors) and most importantly, the public. An analysis approach was developed and tested that can be used to minimize the number of required test locations along a highway segment using common statistical techniques.