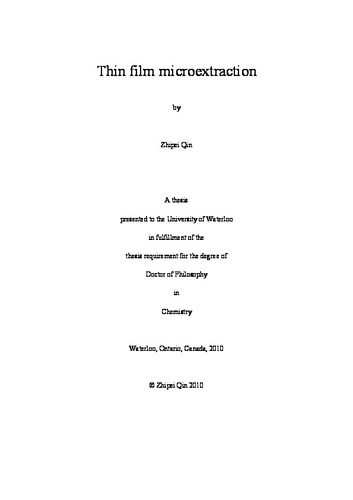 This thesis developed thin film extraction technique, which is a solid phase microextraction (SPME) technique with enhanced sensitivity, without sacrificing analysis time due to the large surface area-to-volume ratio of thin film. Thin film extraction was applied for both spot sampling and time weighted average (TWA) sampling in laboratory and on site. First, an electric drill coupled with a SPME polydimethylsiloxane (PDMS) fiber or a PDMS thin film was used for active spot sampling of polycyclic aromatic hydrocarbons (PAHs) in aqueous samples. Laboratory experiments demonstrated that the sampling rates of fiber and thin film can be predicted theoretically. The performance of a PDMS-coated stir bar at a constant stirring speed was also investigated. Compared with the fiber or the stir bar, the thin film sampler exhibited a higher sampling rate and much better sensitivity due to its higher surface-to-volume ratio and its larger extraction-phase volume. A new thin film active sampler was developed; field tests illustrated that it was excellent for rapid on-site water sampling due to its short sampling period, high sampling efficiency and durability. Second, modeling was applied to study the kinetics of fiber SPME and thin film extraction by COMSOL Multiphysics. The symmetry of absorption of analyte onto the fiber (or thin film) and desorption of calibrant from the fiber in static aqueous solution and a flow through system, was demonstrated by modeling. Furthermore, kinetic calibration method was illustrated to be feasible for fiber SPME in complex aqueous matrix and then was used to calculate the total concentration of analyte in the system. Third, thin film extraction was used in on-site sampling in Hamilton Harbour and for the determination of TWA concentrations of PAHs based on the kinetic calibration. When the thin film sampler, a fiber-retracted SPME field water sampler, and a SPME rod were used simultaneously, the thin film sampler exhibited the highest sampling rate compared to the other water samplers, due to its large surface-to-volume ratio. Fourth, partition equilibriums and extraction rates of PAHs were examined for live biomonitoring with black worms and for the PDMS thin-film in passive sampling mode. In the initial extraction stage, the extracted amounts per surface area by two samplers were similar indicating that thin-film samplers could mimic the behavior of black worms for passive monitoring. A good linear relationship between bioconcentration factors and film-water partition coefficients of PAHs demonstrated the feasibility of thin-film sampler for determining the bioavailability of PAHs in water. Finally, thin film extraction was used for the analysis of human skin and breath under different experimental conditions. Thin film technique could study several skin areas of one person, characterize the skins of different persons, and measure volatile fractions of cosmetic products that were released from the skin. The sampling time in the breath analysis could be further reduced to only 20 seconds when the thin film was rotated with a portable drill.