A City with Two Faces 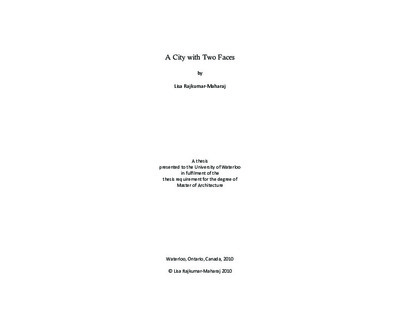 The identity of the Caribbean as a territory is a veritable bricolage of cultural forms. Since Columbus’ mistaken arrival in the West Indies, these islands have become home to Spanish, French, Dutch, British, African, Indian and Chinese immigrants, alongside its Aboriginal inhabitants. Despite the massive diversity that can be seen in these islands, there exists one common cultural expression that has persisted for the past 200 years throughout the Caribbean and Latin America. This celebration is Carnival. Trinidad is the southernmost island in the archipelago that composes the Caribbean. Carnival is celebrated in many of Trinidad’s towns, the biggest celebration being held in its capital city, Port-of-Spain. This research thesis looks at Carnival in Port-of-Spain as a complex urban entity that ritualistically re-energises and reclaims the city’s streets. Through ecstatic celebration, the festival engenders a strong sense of communitas and collective identity, annually reinventing itself and occupying a liminal space between the Ordinary city of day-to-day living and the Extraordinary city of mythological complexity. As the festival moves through the city along its annual Parade Route, it creates an urban narrative which exists invisibly during the year in the city’s collective memory. Through a combination of descriptive text, scholarly research and experiential mapping, A City with Two Faces outlines the transformative qualities of Carnival in the streets of Port-of-Spain from its largest temporary urban forms to its smallest manifestations in syncretic masquerade archetypes.