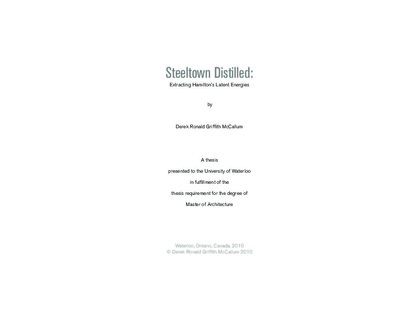 For one hundred years, the mighty blast furnaces of Stelco have burned, melted, and forged the identity of Hamilton, Ontario, into the epitomic Steeltown of Canada. Now US Steel Canada, its recently announced closure has silenced the operation that once defined Hamilton itself, leaving in its wake an array of ruined machines upon a toxic wasteland. But is it really a wasteland? Could the energy latent in the site, its architecture, and its history be recovered? In order to propel the city towards a more sustainable future, could its degradation be used as an agent for change, to transform the site and even provide the basis for a new hybrid industry? This thesis proposes an architectural design for a recalibrated steel industry on the site whose excess energy output is used to fuel a new industry of greenhouses. These greenhouses nurture plants to be used in the gradual bioremediation of the contaminated landscape into a site of both active industry and civic amenity. Through the re-ignition of the blast furnace and the subsequent design opportunities it creates, the site becomes an extension of the civic realm rather than an obstruction to it. Three areas of focus define this thesis proposal. The first is an exploration into the opportunities latent in ruination, both architecturally through entropy and in landscape through toxic contamination. This is followed by an investigation into the century-old relationship between Stelco and Hamilton, and how this history has created the current state of tension between industry and city. Finally, through the re-imagination of the blast furnace and its output, this thesis positions the site as part of an energy flow that links industry with its landscape, and both with the city in which they reside.