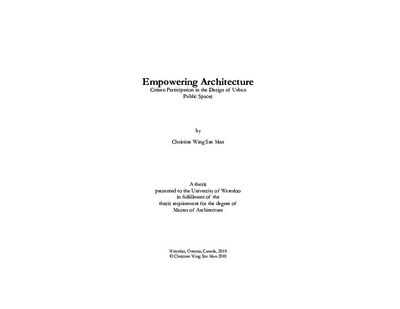 As our contemporary cities continue to revitalize, redefine, and reassert themselves on an international scale, public spaces provide an opportunity to lend the sense of place which makes cities unique and compelling. Several cities such as Toronto, Chicago, and most notably Bilbao have commissioned world renowned architects to design a project in their signature style. These projects are generally anticipated with great excitement, yet once they are completed and a few years have passed, the initial enthusiasm fades along with the international recognition which originated the object. In the end, these projects, regardless of how well they are liked by the citizens of a city, seem to lack a sense of authenticity. Citizen participation offers an opportunity to develop public spaces in a way that will reintroduce the citizen into its built environment. Rather than merely offering a beautiful space, the participatory design model recognizes the collaborative potential with the citizen, and embraces it. This research-based thesis seeks to understand the growing movement of citizen participation and the role it can play in the design of urban public spaces. Furthermore, it examines the role of the architect and how one can begin to successfully integrate the citizen into the design process. The research is divided into three sections. First, a survey of the literature surrounding the field of participation provides an understanding of different attitudes and methods regarding citizen involvement and why its integration into the design of public spaces is important. Second, a series of case studies with varying levels of citizen participation were examined for the role the architect and his/her relationship with the citizen, as well as the overall effectiveness public participation had on the end result. Finally, the third section illustrates two applications of a participation workshop, originally designed by Proboscis, both located in Winnipeg, Manitoba. This thesis maintains that citizen participation is not only beneficial to the development of urban public spaces but is essential if one wishes to design a space that can empower a neighbourhood and its city. Moreover, public spaces designed through the participatory design model allows for citizens to take ownership for the space and appropriate it as their own, which will lead to its continual development, transforming the space into a locus for the city.