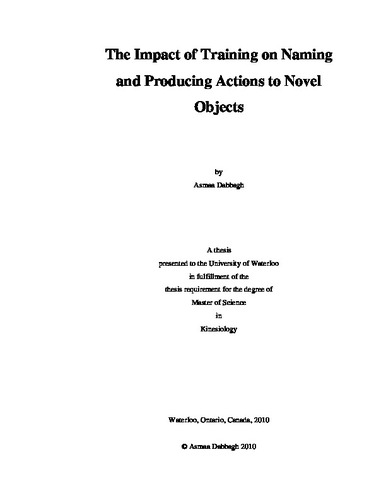 Visual object similarity, action similarity and semantic information are believed to influence both object naming and action production. The Naming and Action Model (NAM) developed by Yoon, Heinke, and Humphreys (2002) suggests that naming objects requires access to semantics, but that there are two routes to action production; an indirect route via semantics, and a direct route that bypasses semantics. For example, when presented with a known object like a hammer, one may retrieve action information from the representational knowledge of its function or directly from its visual characteristics. Past research suggests that producing actions with known objects relies mostly on using the direct route and producing actions with novel objects relies mostly on using the indirect route via semantics. However, this has not been clearly shown. Therefore, the current study examines the role of semantics on object naming and producing actions when training on novel object-action associations. Participants were asked to learn novel object-action associations that were labeled with either the names of semantically similar items or semantically dissimilar items. After an initial learning session, participants named the objects, produced novel actions with the objects and produced novel actions with a cylinder in response to the previously learned labels. Participants then practiced the actions with the objects over three sessions. During the final session, participants were given a reminder of the object-action associations and then they were tested on them again. Results showed that before and after practice, participants made more naming errors and action errors with the cylinder for objects associated with semantically similar labels than objects associated with semantically dissimilar labels. This suggests that when naming objects and producing actions with the cylinder before and after practice, participants were likely relying on the semantic route. However, when participants produced actions with the objects, the pattern of results was different. Before practice, participants made more action errors with objects associated with semantically similar labels than objects associated with semantically dissimilar labels. After practice, participants made equivalent numbers of action errors for objects associated with semantically similar and dissimilar labels. This suggests that participants were likely using the semantic route before practice and the direct route after practice.