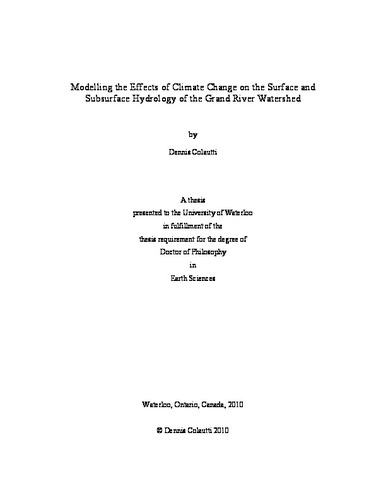 A numerical modelling analysis of climate change’s precipitation effects on the long-term, averaged surface and subsurface hydrology of the Grand River Watershed (GRW) was undertaken in order to assess possible areas of concern for decision makers in the water management sector. The physically-based, fully-integrated and variably-saturated 3-D surface-subsurface numerical simulator, HydroGeoSphere, was used to drive five mid-21st century climate change scenarios, developed from multiple general circulation models. Calibration involved altering measured and literature-derived hydraulic conductivity and precipitation distribution estimates, resulting in very good matching between observed and simulated long-term average surface flow at all gauge stations. Subsurface head results, too, matched observed heads quite well, though groundwater linkage to neighbouring watersheds was not included. When groundwater linkage to neighbouring watersheds was allowed, via regional Dirichlet boundary conditions used in a parent study, groundwater throughput was deemed to be unrealistic. All but one of the climate change scenarios caused an increase in both river discharge and water table elevation, with the greatest climate perturbations causing the greatest increases. For Scenario 1 (5% less precipitation than the 1960-to-1999 average), percentage discharge changes averaged -15% over all gauge stations. For the other scenarios (more precipitation than average), the inter-scenario discharge response ranged from approximately +12% to +59%. In general the range of inter-subcatchment response was greater than was the range for intra-subcatchment response; the greatest percentage response was consistently in the Speed River subcatchment, while the least was consistently in the Nith and Conestogo subcatchments. The exception was the application of less-than-average precipitation to the Grand River, whose gauge stations reported percentage changes in discharge that varied more substantially from one another. Subsurface hydrology reacted to the climate change scenarios in much the same manner as did the surface hydrology, with all climate change scenarios associated with a precipitation increase unsurprisingly resulting in higher total hydraulic heads throughout the entire domain. Specifically, the minimum and maximum mean head increases among the climate change scenarios were 0.41 m and 1.25 m respectively, while the only decrease was an average of 0.55 m. Similarly, the depth from the ground surface to the water table decreased in most scenarios, the maximum water table rise being 1.08 m and the minimum 0.36 m. When precipitation was allowed to decrease by 5% relative to the long-term average, the average water table elevation decreased by 0.48 m. However the water table’s pattern of high and low points remained very much the same among all climate change scenarios, suggesting that basin-wide groundwater flow patterns may not be among the hydrological measures most sensitive to climate change. Groundwater recharge, like almost all other components of the water budget, changed in linear proportion to the climate forcing and in agreement with GRW recharge estimates developed by others. Evapotranspiration, which met potential evapotranspiration in all scenarios due to the constant application of precipitation, was the only element of the water budget that did not increase, even though the water table was elevated closer to the rooting zone by most of the climate scenarios. On a smaller scale, changes in flow patterns may well be expected, given that zones of infiltration were observed to intensify with most of the climate forcing.

Dennis Colautti (2010). Modelling the Effects of Climate Change on the Surface and Subsurface Hydrology of the Grand River Watershed. UWSpace. http://hdl.handle.net/10012/5155