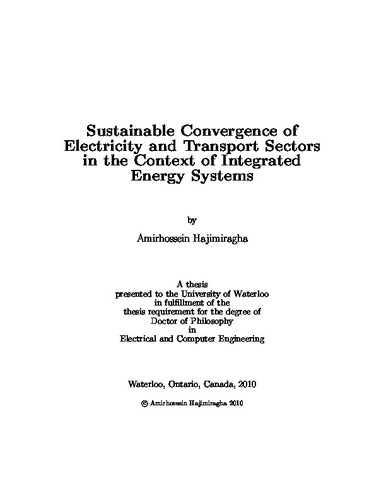 Transportation is one of the sectors that directly touches the major challenges that energy utilities are faced with, namely, the significant increase in energy demand and environmental issues. In view of these concerns and the problems with the supply of oil, the pursuit of alternative fuels for meeting the future energy demand of the transport sector has gained much attention. The future of transportation is believed to be based on electric drives in fuel cell vehicles (FCVs) or plug-in electric vehicles (PEVs). There are compelling reasons for this to happen: the efficiency of electric drive is at least three times greater than that of combustion processes and these vehicles produce almost zero emissions, which can help relieve many environmental concerns. The future of PEVs is even more promising because of the availability of electricity infrastructure. Furthermore, governments around the world are showing interest in this technology by investing billions of dollars in battery technology and supportive incentive programs for the customers to buy these vehicles. In view of all these considerations, power systems specialists must be prepared for the possible impacts of these new types of loads on the system and plan for the optimal transition to these new types of vehicles by considering the electricity grid constraints. Electricity infrastructure is designed to meet the highest expected demand, which only occurs a few hundred hours per year. For the remaining time, in particular during off-peak hours, the system is underutilized and could generate and deliver a substantial amount of energy to other sectors such as transport by generating hydrogen for FCVs or charging the batteries in PEVs. This thesis investigates the technical and economic feasibility of improving the utilization of electricity system during off-peak hours through alternative-fuel vehicles (AFVs) and develops optimization planning models for the transition to these types of vehicles. These planning models are based on decomposing the region under study into different zones, where the main power generation and electricity load centers are located, and considering the major transmission corridors among them. An emission cost model of generation is first developed to account for the environmental impacts of the extra load on the electricity grid due to the introduction of AFVs. This is followed by developing a hydrogen transportation model and, consequently, a comprehensive optimization model for transition to FCVs in the context of an integrated electricity and hydrogen system. This model can determine the optimal size of the hydrogen production plants to be developed in different zones in each year, optimal hydrogen transportation routes and ultimately bring about hydrogen economy penetration. This model is also extended to account for optimal transition to plug-in hybrid electric vehicles (PHEVs). Different aspects of the proposed transition models are discussed on a developed 3-zone test system. The practical application of the proposed models is demonstrated by applying them to Ontario, Canada, with the purpose of finding the maximum potential penetrations of AFVs into Ontario’s transport sector by 2025, without jeopardizing the reliability of the grid or developing new infrastructure. Applying the models to this real-case problem requires the development of models for Ontario’s transmission network, generation capacity and base-load demand during the planning study. Thus, a zone-based model for Ontario’s transmission network is developed relying on major 500 and 230 kV transmission corridors. Also, based on Ontario’s Integrated Power System Plan (IPSP) and a variety of information provided by the Ontario Power Authority (OPA) and Ontario’s Independent Electricity System Operator (IESO), a zonal pattern of base-load generation capacity is proposed. The optimization models developed in this study involve many parameters that must be estimated; however, estimation errors may substantially influence the optimal solution. In order to resolve this problem, this thesis proposes the application of robust optimization for planning the transition to AFVs. Thus, a comprehensive sensitivity analysis using Monte Carlo simulation is performed to find the impact of estimation errors in the parameters of the planning models; the results of this study reveals the most influential parameters on the optimal solution. Having a knowledge of the most affecting parameters, a new robust optimization approach is applied to develop robust counterpart problems for planning models. These models address the shortcoming of the classical robust optimization approach where robustness is ensured at the cost of significantly losing optimality. The results of the robust models demonstrate that with a reasonable trade-off between optimality and conservatism, at least 170,000 FCVs and 900,000 PHEVs with 30 km all-electric range (AER) can be supported by Ontario’s grid by 2025 without any additional grid investments.