The HOT Solution: An examination of the desirability for High Occupancy/Toll (HOT) lanes in the Greater Toronto Area 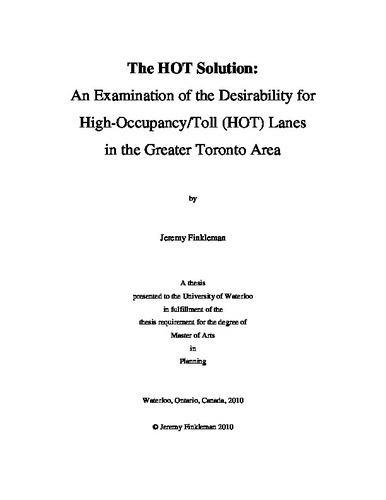 This study assessed the desirability for High-Occupancy/Toll (HOT) lanes in the Greater Toronto Area (GTA) through stated preference and revealed traffic volume data gathering and analysis techniques. 4,000 surveys, distributed in five sample areas, asked respondents how much they would be willing to pay to escape congestion in eight unique trip conditions. Stated preference results found considerable public support for HOT-lanes in the GTA. In six out of eight trip conditions, a majority of respondents preferred to pay to travel in express lanes rather than endure congestion. Respondent willingness to pay (WTP) mean values varied considerably by trip condition. Willingness to pay to escape congestion was influenced by trip characteristics and driver factors. Trip urgency, traffic speed, and freeway trip distance were found to be statistically significant trip characteristic indicators of WTP. Previous exposure to electronic tolling and annual household income were found to be significant driver factor indicators of WTP in most trip conditions. Respondent gender and freeway travel frequency were found to be statistically significant driver factor indicators of WTP in some trip conditions. The presence of Hwy 407-ETR, an electronically tolled by-pass to Hwy 401, allowed for an examination of the effects of Hwy 401 volume and trip urgency on driver choice to use the tolled alternative. Results indicated that trip urgency and Hwy 401 volume were correlated with Hwy 407 throughput share. During periods of high trip urgency and high Hwy 401 volume, a substantial proportion of Hwy 401/407 corridor drivers chose to pay approximately $0.20/km to escape congestion.

Jeremy Finkleman (2010). The HOT Solution: An examination of the desirability for High Occupancy/Toll (HOT) lanes in the Greater Toronto Area. UWSpace. http://hdl.handle.net/10012/5151