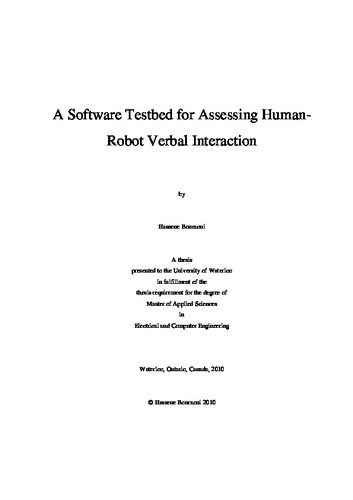 Verbal interaction provides a natural and social-style interaction mode by which robots can communicate with general public who is likely unknowledgeable in robotics. This interaction mechanism is also very important for a broad range of users such as hands/eyes-busy users, motor-impaired users, users with vision impairment and users working in hostile environments. Verbal interaction is very popular in robotics especially in personal assistive robots, which are used to help elderly people and in entertainment robots. Several research endeavors have been assigned to endow the robots with verbal interaction as a high-level faculty. However, the language usages of many of them were simple and may not be considered as full speech dialogue systems providing natural language understanding. In this thesis, we investigate a testbed platform that can be deployed to enable human-robot verbal interaction. The proposed approach encompasses a design pattern-based user interface and a user-independent automatic speech recognizer with a modified grammar module in the context of human-robot interaction. The user interface is used to simulate robots response toward multiple users’ voice commands. The performance of the proposed testbed has been evaluated quantitatively using a set of evaluation metrics such as word correct rate, recognition time and success and false action rates. The conducted experiments show the promising features of the system. The results obtained could be refined even further by training the system for more voice commands and the whole system could be ported to real robotic platforms such as Peoplebot to endow it with natural language understanding.