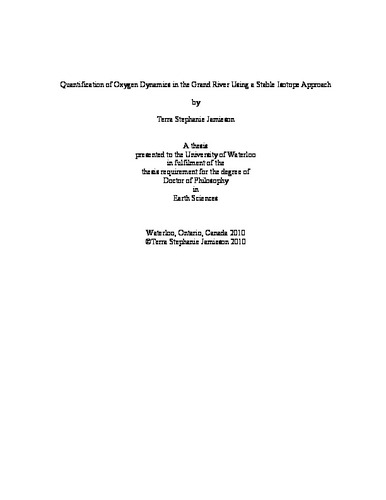 The current study monitored DO, stable isotopes of O2 (δ18O-O2 and δ18O-H2O) along with water quality parameters on both a diel and day-time only basis in the Grand River over several seasons and locations. A dynamic dual mass-balance model was developed to quantify rates of community respiration (CR), gross primary production (GPP), and gas exchange coefficients (k) in the Grand River, Ontario, Canada. Monitoring was conducted at three locations along a longitudinal gradient: 1) West Montrose, located upstream of the cities of Kitchener and Waterloo in a predominately agricultural landscape; 2) Bridgeport, located downstream from WM and the Conestogo tributary confluence, and 3) Blair, located downstream of the cities of Kitchener and Waterloo. Values of k in the Grand River ranged from 3.6 to 8.6 day-1, over discharges ranging from 5.6 to 22.4 m3 s-1. The k values were relatively constant over the range of discharge conditions studied. Overall, k values obtained with the isotope model for the Grand River were found to be lower than predicted by the traditional approaches evaluated, highlighting the importance of determining site-specific values of k. Metabolism results indicated that the Grand River is negatively impacted by both agricultural and urban inputs from the surrounding catchment. Metabolism rates in the Grand River (GPP = 2.2 to 19.9 and CR = 4.0 to 29.6 g O2 m-2 d-1) were found to be greater than published estimates for relatively undisturbed systems. In particular, net production at Blair was consistently below zero, indicating that DO inputs are not sufficient to overcome the oxidative demand upstream of this location. The addition of an isotopic mass balance provides for a corroboration of the input parameter estimates between the two balances, and constrains the range of potential input values to allow for a better estimate of GPP, CR and k. Input parameter uncertainty and sensitivity most likely reflect the dynamic processes occurring in the Grand River watershed. A better understanding of processes affecting δ18O-O2 would improve the capability of the model to replicate observed data, and provide more confidence in predicting metabolic processes in impacted rivers.