Acceleration and Heating of Metal Particles in Condensed Matter Detonation 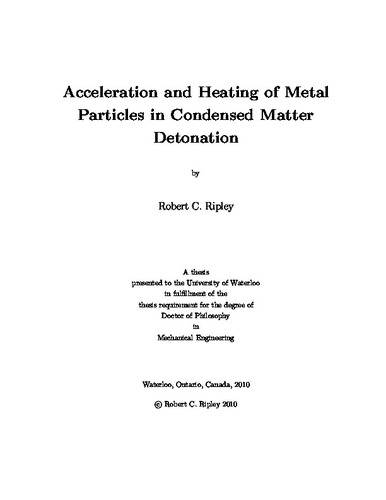 For condensed explosives containing metal particle additives, interaction of the detonation shock and reaction zone with the solid inclusions leads to non-ideal detonation phenomena. Features of this type of heterogeneous detonation are described and the behaviour is related to momentum loss and heat transfer due to this microscopic interaction. For light metal particles in liquid explosives, 60-100% of the post-shock velocity and 20-30% of the post-shock temperature are achieved during the timescale of the leading detonation shock crossing a particle. The length scales corresponding to particle diameter and detonation reaction-zone length are related to define the interaction into three classes, bound by the small particle limit where the shock is inert, and by the large particle limit dominated by thin-detonation-front diffraction. In particular, the intermediate case, where the particle diameter is of similar order of magnitude to the reaction-zone length, is most complex due to two length scales, and is therefore evaluated in detail. Dimensional analysis and physical parameter evaluation are used to formalize the factors affecting particle acceleration and heating. Examination of experimental evidence, analysis of flow parameters, and thermochemical equilibrium calculations are applied to refine the scope of the interaction regime. Timescales for drag acceleration and convective heating are compared to the detonation reaction time to define the interaction regime as a hydrodynamic problem governed by inviscid shock mechanics. A computational framework for studying shock and detonation interaction with particles is presented, including assumptions, models, numerics, and validation. One- and two-dimensional mesoscale calculations are conducted to highlight the fundamental physics and determine the limiting cases. Three-dimensional mesoscale calculations, with up to 32 million mesh points, are conducted for spherical metal particles saturated with a liquid explosive for various particle diameters and solid loading conditions. Diagnostic measurements, including gauges for pressure, temperature, and flow velocity, as well as mass-averaged particle velocity and temperature, are recorded for analysis. Mesoscale results for particle acceleration and heating are quantified in terms of shock compression velocity and temperature transmission factors. In addition to the density ratio of explosive to metal, the solid volume fraction and the ratio of detonation reaction-zone length to the particle diameter are shown to significantly influence the particle acceleration and heating. A prototype heterogeneous explosive system, consisting of mono-disperse spherical aluminum particles saturated with liquid nitromethane explosive, is studied to develop fitting functions describing the shock compression transmission factors. Results of the mesoscale calculations are formulated into a macroscopic physical model describing an effective shock compression drag coefficient and Nusselt number. The novel models are explored analytically and are then applied to two challenging sets of test cases with comparison to experiment. Heterogeneous detonation is considered for aluminum particles saturated with liquid nitromethane, and inert particle dispersal is studied using a spherical explosive charge containing steel beads saturated in nitromethane. Finally, discussion of practical considerations and future work is followed by concluding remarks.