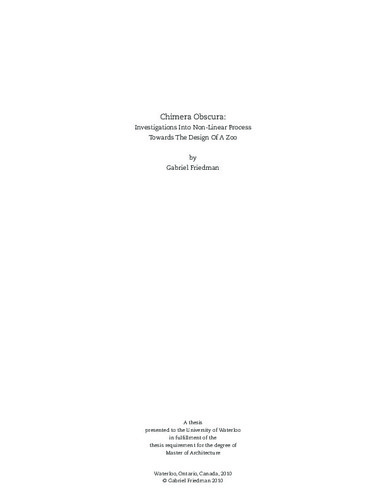 Across diverse territories - that might otherwise be considered separate from one another - similar morphogenetic and emergent processes appear to be at play. The continuous re-inscription of the world, and its inner workings, in perceptible terms is impelled by a desire to intervene in it with greater precision and subtlety. But if emergence is already an operational force from which reality is spun, what, if any, benefit might be gained from a practice that negotiates its subject on these same terms? The thesis departs from the premise that both the world and our cultural constructions of it are products of emergence, and thus, they may be described using a convergent set of terms. The research tests this proposition in a design for a new zoological environment. Besieged by a set of incompatible objectives, the contested territory of the traditional zoo program is approached with an ethics of emergence - one where large problems are resolved into small, knowable truths or rules. The proposed design transgresses the one-sided theatricality of the fixed perspective, frame, and stage set, reconceiving it instead as an organism in a state of dynamic equilibrium in which human visitors are active participants, thoroughly imbricated and entangled. The work is centred on process-oriented investigations in computational environments. Through experiments with parametric modeling, object-oriented programming, and other rule-based simulations, the research delaminates the zoo complex into a series of parallel machines. Each is conceived as a rule-driven procedural sequence with its own set of inputs and outputs, which, when coupled together, form the notional feedback loops of adaptive living organisms. These processes are deployed in order to satisfy a longing for spatial conditions that are at once finite and indeterminate, both bound by gravity and disorienting, a place that is at the same time tempered and wild.