Impact of Light Scatter on the Assessment of Retinal Arteriolar Hemodynamics 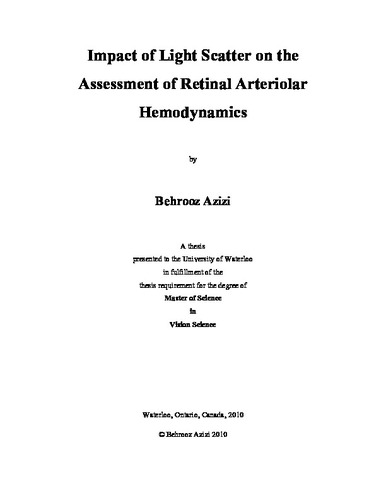 Introduction and Purpose: Vascular pathologies play an important role in the etiology and progression of number of ocular diseases. Many instruments are developed to monitor retinal hemodynamics, including the Canon Laser Blood Flowmeter (CLBF), in an attempt to better understand the pathophysiology of the disease (Chapter 2). The purpose of this thesis is to determine the impact of light scatter on retinal arteriolar hemodynamic measurement assessed by the CLBF as intraocular light scatter is an inevitable consequence of ageing and particularly cataract. Methodology: Chapter 4 – Artificial light scatter model: One eye from each of 10 healthy young subjects between the ages of 18 and 30 (23.6 ± 3.4) was randomly selected. To simulate light scatter, cells comprising a plastic collar and two plano lenses were filled with solutions of differing concentrations of polystyrene microspheres (Polysciences Inc., USA). 0.002%, 0.004%, 0.006%, 0.008% were prepared, as well as distilled water only. After a preliminary screening to confirm subject eligibility, seven arteriolar hemodynamic measurements were taken by randomly placing the cells between the CLBF objective lens and the subjects’ cornea. Chapter 5 – Ten patients scheduled for extracapsular cataract extraction using phacoemulsification and intraocular lens implantation between the ages of 61 and 84 (mean age 73 years, SD ± 8) were prospectively recruited. Two visits were required to complete the study; One prior to the surgery and one at least six weeks after the surgery to allow for full post-operative recovery. The severity of cataract was documented using the Lens Opacity Classification System (LOCS, III) at the first visit. Each subject underwent visual function assessment at both visits using logMAR Early Treatment Diabetic Retinopathy Study (ETDRS) visual acuity charts and the Brightness Acuity Tester (BAT). Retinal arteriolar hemodynamics were measured at both visits using the high intensity setting of the Canon Laser Blood Flowmeter. Results: Chapter 4: Our light scatter model resulted in an artifactual increase of retinal arteriolar diameter (p<0.0001) and thereby increased retinal blood flow (p<0.0001). The 0.006% and 0.008% microsphere concentrations produced significantly higher diameter and flow values than baseline. Centerline blood velocity, however, was not affected by light scatter. Retinal arteriolar diameter values were significantly less with the high intensity laser than with the low intensity laser (p=0.0007). Chapter 5: Group mean retinal arteriolar diameter and blood flow were reduced following extracapsular cataract extraction (Wilcoxon signed-rank test, p=0.022 and p=0.028 respectively); however, centerline blood velocity was unchanged (Wilcoxon signed-rank test, p=0.074). Conclusions: Using an artificial light scatter model (Chapter 3), we demonstrated that the densitometry assessment of vessel diameter is increasingly impacted as the magnitude of artificial light scatter increases; this effect can be partially negated by increasing laser intensity. We showed similar results in the presence of cataract (Chapter 4) by measuring the retinal arteriolar hemodynamics before and after removal of cataract. Care needs to be exercised in the interpretation of studies of retinal vessel diameter that use similar densitometry techniques as cataract is an inevitable consequence of aging.