A Risk-Based Optimization Framework for Security Systems Upgrades at Airports 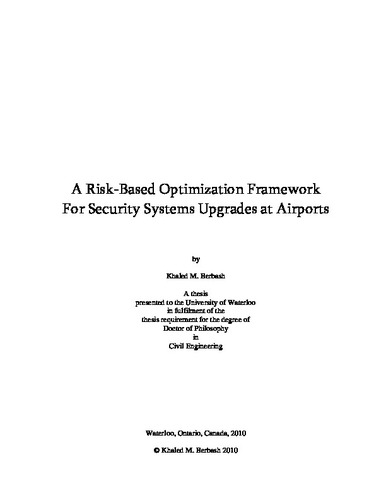 Airports are fast-growing dynamic infrastructure assets. For example, the Canadian airport industry is growing by 5% annually and generates about $8 billion yearly. Since the 9/11 tragedy, airport security has been of paramount importance both in Canada and worldwide. Consequently, in 2002, in the wake of the attacks, the International Civil Aviation Organization (ICAO) put into force revised aviation security standards and recommended practices, and began a Universal Security Audit Program (USAP), in order to insure the worldwide safeguarding of civil aviation in general, and of airports in particular, against unlawful interference. To improve aviation security at both the national level and for individual airport, airport authorities in North America have initiated extensive programs to help quantify, detect, deter, and mitigate security risk. At the research level, a number of studies have examined scenarios involving threats to airports, the factors that contribute to airport vulnerability, and decision support systems for security management. However, more work is still required in the area of developing decision support tools that can assist airport officials in meeting the challenges associated with decision about upgrades; determining the status of their security systems and efficiently allocating financial resources to improve them to the level required. To help airport authorities make cost-effective decisions about airport security upgrades, this research has developed a risk-based optimization framework. The framework assists airport officials in quantitatively assessing the status of threats to their airports, the vulnerability to their security systems, and the consequences of security breaches. A key element of this framework is a new quantitative security metric ; the aim of which is to assist airport authorities self-assess the condition of their security systems, and to produce security risk indices that decision makers can use as prioritizing criteria and constraints when meeting decisions about security upgrades. These indices have been utilized to formulate an automated decision support system for upgrading security systems in airports. Because they represent one of the most important security systems in an airport, the research focuses on passenger and cabin baggage screening systems. Based on an analysis of the related threats, vulnerabilities and consequences throughout the flow of passengers, cabin baggage, and checked-in luggage, the proposed framework incorporates an optimization model for determining the most cost-effective countermeasures that can minimize security risks. For this purpose, the framework first calculates the level of possible improvement in security using a new risk metric. Among the important features of the framework is the fact that it allows airport officials to perform multiple “what-if” scenarios, to consider the limitations of security upgrade budgets, and to incorporate airport-specific requirements. Based on the received positive feedback from two actual airports, the framework can be extended to include other facets of security in airports, and to form a comprehensive asset management system for upgrading security at both single and multiple airports. From a broader perspective, this research contributes to the improvement of security in a major transportation sector that has an enormous impact on economic growth and on the welfare of regional, national and international societies.