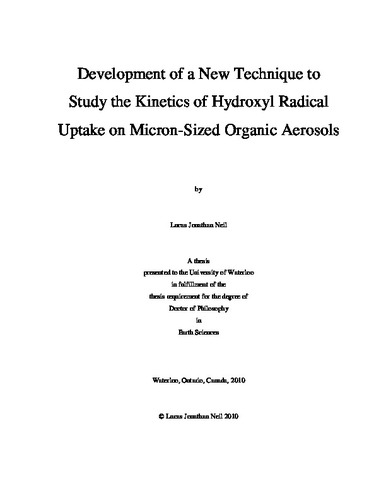 The importance of the hydroxyl radical (OH) to tropospheric chemistry is well known. The radicals’ ability to react with most atmospheric trace gases allows it to act as the main removal mechanism for these gases. Due to the highly reactive nature of OH, the oxidizing capacity of the atmosphere is often defined simply by its concentration. Owing to its significant role, knowledge of all OH chemistry, homogeneous and heterogeneous, is important to understanding the chemistry of the troposphere. In order to accurately predict future levels of OH and other trace gases, a thorough understanding of all processes and variables involved in the emission and sequestering of these compounds is essential. The gas-phase chemistry of OH is well known and has been extensively characterized. The one process that scientists are still trying to fully understand is its involvement in heterogeneous chemistry. Some studies have suggested that the inclusion of OH heterogeneous chemistry is important to fully model tropospheric chemistry, while other studies have suggested that it can be neglected entirely. It is therefore important to study and understand the conditions in which heterogeneous chemistry is significant. In order to do this accurately, scientists must first understand the process and magnitude of the uptake of OH onto atmospherically relevant surfaces. The main objective of this work was the development of a new analytical tool for the study of heterogeneous hydroxyl radical reactions. To this end, experiments were conducted to determine the most efficient approach to couple a low pressure aerosol flow tube (LP-AFT) to a chemical ionisation mass spectrometer (CIMS). The use of CIMS allowed for the accurate detection and quantification of hydroxyl radicals. Through iterative experimentation the system was designed and became operational. Experimental work focused on laboratory studies of reaction kinetics, with data reported in this work representing the reactions of OH with model atmospheric aerosols. The uptake of OH on organic aerosols was examined using the newly developed LP-AFT-CIMS system at standard temperature. Liquid oleic acid particles were used to mimic atmospherically relevant particles. The uptake coefficient, γ, on oleic acid particles was determined to be 0.49 ± 0.08 for a log-normally distributed aerosol at ~400nm. This value is in very good agreement with currently published data. However, the overall error of this method (~16%) is observed to be lower than other currently available methods, which have errors ranging from 20 – 30%. It is postulated that the mass accommodation coefficient, α, for OH radicals on organic surfaces approaches this value under standard atmospheric conditions. It’s also suggested that under the correct conditions the heterogeneous loss of OH could contribute to the overall budget of the OH radical. Further atmospheric implications of this reaction are discussed.