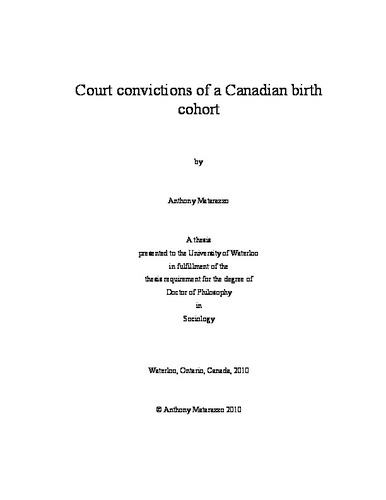 Although youth crime and young offenders have attracted a significant amount of ongoing research attention and have given rise to a voluminous amount of literature devoted to describing and explaining their existence and providing suggestions for what may be done, much less attention has been paid to the youth court itself and, more specifically, the convictions of young persons over time. Using the Youth Court Survey as a source of longitudinal data, the present study describes the youth court convictions of a birth cohort of Canadian offenders from the time they officially enter the system at age 12 up to their 18th birthdays. The criminal career paradigm is used in the present study to guide the detailed and structured analysis of the key features of these conviction histories by partitioning convictions into four central parameters: prevalence of convictions, individual frequencies, age at first conviction, and patterns of transition (i.e. specialization and versatility). Findings revealed that approximately 23,000 males and 6,000 females—12 percent and 3 percent of the 1979/80 birth cohort, respectively—were convicted of at least one offence in youth court. While the patterns of convictions were found to be similar for both males and females, the prevalence among females rose relatively faster at younger ages and peaked earlier. Findings also indicated that the vast majority of young people who were convicted in a Canadian youth court had a conviction history consisting of only one conviction. However, findings also highlighted the extent to which the phenomenon of a concentration of offending, which has been noted in numerous countries, is present in Canada with a small group of chronic offenders being responsible for a disproportionate amount of court activity. The study also found that the younger an individual was at the time of their first conviction, the more likely they were to accumulate future convictions, and also to receive a conviction for a violent offence. Lastly, findings revealed that the youth court career is characterized by neither complete specialization nor complete versatility, but rather that these two tendencies in offending exist side by side. Overall, the current study provides a more complete picture of the conviction history of this cohort of young offenders than one-time snapshots from individual surveys could allow.