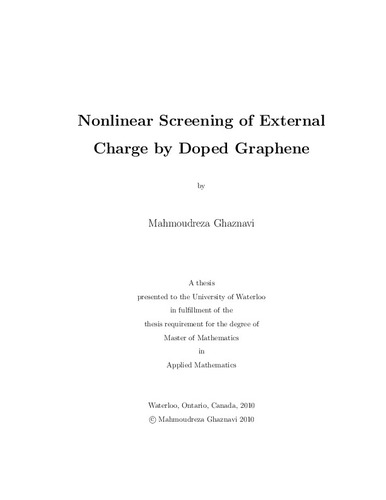 In the rst part of this thesis we discuss some details of properties of graphene and we explain the tight-binding approach to nd the energy spectrum in graphene. In the second part of the thesis, we solve a nonlinear integral equation for the electrostatic potential in doped graphene due to an external charge, arising from a Thomas-Fermi (TF) model for screening by graphene's electron bands. In particular, we study the e ects of a nite equilibrium charge carrier density in graphene, non-zero temperature, non-zero gap between graphene and a dielectric substrate, as well as the nonlinearity in the band density of states. E ects of the exchange and correlation interactions are also brie y discussed for undoped graphene at zero temperature. Results from the nonlinear model are compared with results from both the linearized TF model and the dielectric screening model within the random phase approximation (RPA). In addition, the image potential of the external charge is evaluated from the solution of the nonlinear integral equation and compared to the results of linear models. We have found generally good agreement between the results of the nonlinear TF model and the RPA model in doped graphene, apart from Friedel oscillations in the latter model. However, relatively strong nonlinear e ects in the TF model are found to persist even at high doping densities and large distances of the external charge.