The Experiences of Muslim Women Employed in the Tourism Industry: The Case of Oman 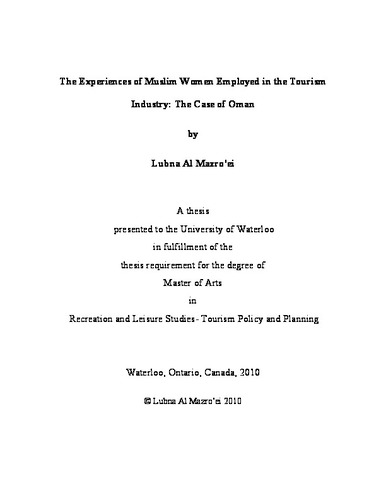 The purpose of this thesis is to understand the experiences and meanings of tourism employment for Muslim women in the Middle East, including the positive and negative aspects of this form of employment. The study was conducted in Oman, which was the research site and cultural setting for this study. The theoretical paradigm that guided this study was social constructionism. A constructivist grounded theory methodology was also used for this study in order to interpret and analyze the collected data into themes. A combination of convenience sampling and snowball technique was used to recruit participants for the interviews, resulting in a total of 9 interviews being conducted with local Muslim women working in the Oman tourism industry. The data were collected through open-ended interviews conducted face to face, using a semi structured interview format. The analysis process led to the development of seven themes. The seven main themes related to finding work in the tourism field, facing negative attitudes, challenges of tourism work, dealing with negative attitudes and challenges, the importance of tourism work in women lives, an expanded vision of tourism work, and implications for social change. The study revealed that the idea of women’s tourism work as exploitation is complex and multi-layered in Oman. Although there were some indicators of exploitation for the Omani tourism workers in this study, this form of work was also shown to be a source of benefits and form of empowerment for women. Further, the study revealed that tourism employment could also be seen as a site for women’s resistance, particularly for Muslim women seeking to change attitudes towards women, and to create a new society.