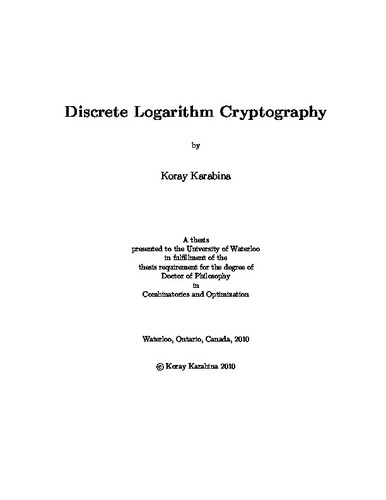 The security of many cryptographic schemes relies on the intractability of the discrete logarithm problem (DLP) in groups. The most commonly used groups to deploy such schemes are the multiplicative (sub)groups of finite fields and (hyper)elliptic curve groups over finite fields. The elements of these groups can be easily represented in a computer and the group arithmetic can be efficiently implemented. In this thesis we first study certain subgroups of characteristic-two and characteristic-three finite field groups, with the goal of obtaining more efficient representation of elements and more efficient arithmetic in the corresponding groups. In particular, we propose new compression techniques and exponentiation algorithms, and discuss some potential benefits and applications. Having mentioned that intractability of DLP is a basis for building cryptographic protocols, one should also take into consideration how a system is implemented. It has been shown that realistic (validation) attacks can be mounted against elliptic curve cryptosystems in the case that group membership testing is omitted. In the second part of the thesis, we extend the notion of validation attacks from elliptic curves to hyperelliptic curves, and show that singular curves can be used effectively in such attacks. Finally, we tackle a specific location-privacy problem called the nearby friend problem. We formalize the security model and then propose a new protocol and its extensions that solve the problem in the proposed security model. An interesting feature of the protocol is that it does not depend on any cryptographic primitive and its security is primarily based on the intractability of the DLP. Our solution provides a new approach to solve the nearby friend problem and compares favorably with the earlier solutions to this problem.