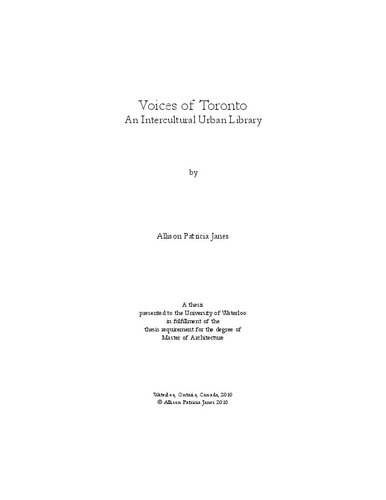 In the last one hundred years Toronto’s cultural identity has been completely transformed. Once a quiet and thoroughly conservative Anglo-Saxon town, Toronto has become a thriving and dynamic multicultural city. Today a majority of the city’s residents are visible minorities and almost half are foreign-born; the largest of any city in the world. Never before have so many ‘different’ people shared place. While successive waves of immigration have had a profound and measurable impact on Toronto’s cultural and social character, the impact on its public spaces and institutions remains more illusive. This thesis proposes an architectural design for an intercultural library and language centre that seeks to give voice to the principles of diversity that have energized Toronto, while acknowledging the city’s history of divisiveness and political indifference to immigrants. Set adjacent to the Bickford Centre, an existing ESL school dedicated to serving new immigrants, the proposed intercultural library and language centre will face the Christie Pits Park, the site of Toronto’s worst race riot. Three lines of inquiry structure this thesis. The first is an in-depth sociodemographic investigation of immigration to Toronto. This is followed by an analysis of the meaning and significance of critical intercultural gathering spaces in the city. Finally, the thesis, through the design of the language centre, seeks to explore the capacity of architecture to simultaneously unite and provide amenity for a multicultural city population.