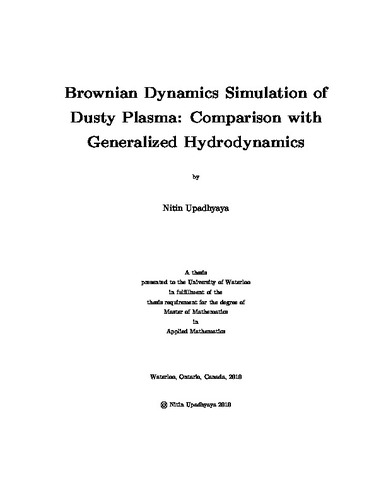 Brownian dynamics (BD) simulation method has been widely used for studying problems in dispersed systems, such as polymer solutions, colloidal suspensions and more recently, complex (dusty) plasmas. The main problem addressed with this simulation technique is that of time scale separation, which occurs when one form of motion in the system is much faster than the other. This can be a serious problem in Molecular dynamics (MD) simulation where very short time steps are needed to handle the fast motions and thus, requiring very long time runs for the proper evolution of slower modes making the simulation very expensive. More importantly, the fast motions may not be of much interest within themselves, as will be the case in a dusty plasma. The motion of neutral atoms or molecules comprising the plasma occurs at a very fast time scale with respect to the motion of dust particles, and is usually of very little interest, though a large number of such neutrals are present. In such cases, an approximate method is usually adopted, whereby the neutral particles are omitted from the simulation and their effect upon the dynamics of dust particles modeled by a combination of random forces and frictional terms. This leads to a recasting of the Newton's Equation of motion solved in MD, to a Langevin equation, solved in BD. Adopting this approach, we simulate a system of charged dust particles interacting via Yukawa potential in a 2-Dimensional layer, and extract relevant equilibrium statistical features such as the radial distribution function, static structure factor and the low frequency dust wave modes. We then propose the use of a Generalized Hydrodynamical (GH) approach to provide a semi-analytical model for the dust collective modes, which not only provides us with good predictions of the wave dispersion but also provides reasonable estimates for wave-number dependent wave damping, both of which will be compared against the results obtained from BD simulation. Finally, through our simulations, we also observe the equilibrium configuration of dust particles in the presence of cold ions streaming perpendicularly into the 2-Dimensional layer of dust particles. This provides us with novel results in the regime of sub-sonic ion flow speeds.