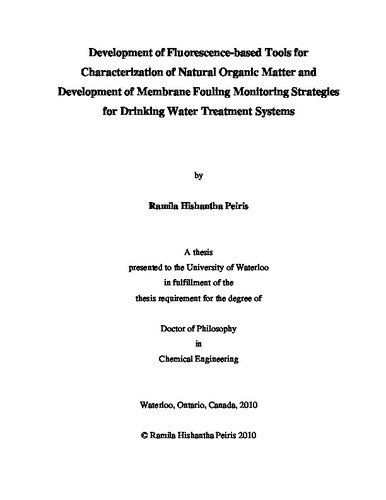 The objective of this research was to develop fluorescence-based tools that are suitable for performing rapid, accurate and direct characterization of natural organic matter (NOM) and colloidal/particulate substances present in natural water. Most available characterization methods are neither suitable for characterizing all the major NOM fractions such as protein-, humic acid-, fulvic acid- and polysaccharide-like substances as well as colloidal/particulate matter present in natural water nor are they suitable for rapid analyses. The individual and combined contributions of these NOM fractions and colloidal/particulate matter present in natural water contribute to membrane fouling, disinfection by-products formation and undesirable biological growth in drinking water treatment processes and distribution systems. The novel techniques developed in this research therefore, provide an avenue for improved understanding of these negative effects and proactive implementation of control and/or optimization strategies. The fluorescence excitation-emission matrix (EEM) method was used for characterization of NOM and colloidal/particulate matter present in water. Unlike most NOM and colloidal/particulate matter characterization techniques, this method can provide fast and consistent analyses with high instrumental sensitivity. The feasibility of using this method for monitoring NOM at very low concentration levels was also demonstrated with an emphasis on optimizing the instrument parameters necessary to obtain reproducible fluorescence signals. Partial least squares regression (PLS) was used to develop calibration models by correlating the fluorescence EEM intensities of water samples that contained surrogate NOM fractions with their corresponding dissolved organic carbon (DOC) concentrations. These fluorescence-based calibration models were found to be suitable for identifying/monitoring the extent of the relative changes that occur in different NOM fractions and the interactions between polysaccharide- and protein-like NOM in water treatment processes and distribution systems. Principal component analysis (PCA) of fluorescence EEMs was identified as a viable tool for monitoring the performance of biological filtration as a pre-treatment step, as well as ultrafiltration (UF) and nanofiltration (NF) membrane systems. The principal components (PCs) extracted in this approach were related to the major membrane foulant groups such as humic substances (HS), protein-like and colloidal/particulate matter in natural water. The PC score plots generated using the fluorescence EEMs obtained after just one hour of UF or NF operation could be related to high fouling events likely caused by elevated levels of colloidal/particulate-like material in the biofilter effluents. This fluorescence EEM-based PCA approach was sensitive enough to be used at low organic carbon levels present in NF permeate and has potential as an early detection method to identify high fouling events, allowing appropriate operational countermeasures to be taken. This fluorescence EEM-based PCA approach was also used to extract information relevant to reversible and irreversible membrane fouling behaviour in a bench-scale flat sheet cross flow UF process consisting of cycles of permeation and back-washing. PC score-based analysis revealed that colloidal/particulate matter mostly contributed to reversible fouling, while HS and protein-like matter were largely responsible for irreversible fouling. This method therefore has potential for monitoring modes of membrane fouling in drinking water treatment applications. The above approach was further improved by utilizing the evolution of the PC scores over the filtration time and relating these to membrane fouling by the use of PC scores’ balanced-based differential equations. Using these equations the proposed fluorescence-based modeling approach was capable of forecasting UF fouling behaviours with good accuracy based solely on fluorescence data obtained at time = 15 min from the initiation of the filtration process. In addition, this approach was tested experimentally as a basis for optimization by modifying the UF back-washing times with the objective of minimizing energy consumption and maximizing water production. Preliminary optimization results demonstrated the potential of this approach to reduce power consumption by significant percentages. This approach was also useful for identifying the fouling components of the NOM that were contributing to reversible and irreversible membrane fouling. Grand River water (Southwestern Ontario, Canada) was used as the natural water source for developing the techniques presented in this thesis. Future research focusing on testing these methods for monitoring of membrane fouling and treatment processes in large-scale drinking water treatment facilities that experience different sources of raw water would be useful for identifying the limitation of these techniques and areas for improvements.