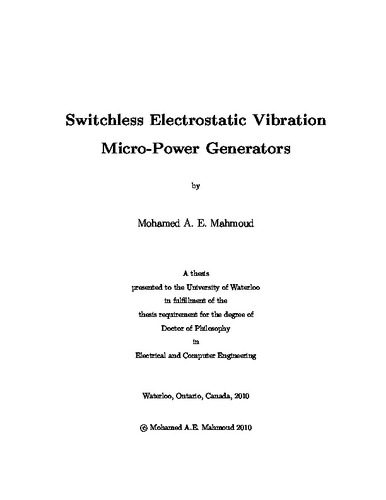 Energy harvesting from the surrounding environment has become a hot topic in research as an alternative powering solution. The concept deals with scavenging, as well as, harvesting energy from the surrounding energy sources. Harvesting vibrations, through Micro-Power Generators (MPGs) , has drawn a lot of attention recently due to the reduction in the power requirement of the current sensors and integrated ciruits, and the abundance of ambient vibrations in many environments. Vibration Micro-Power generators (VMPGs) use one of three transduction mechanisms: piezoelectric, electromagnetic or electrostatic. Although electrostatic MPGs are the most compatible mechanism with ICs technology, many challenges face their optimal operation including low efficiency due to power electronics switching losses, the need for pre-charge, and the inability to operate in vibration environments with low frequencies and amplitudes. The objective of this thesis is to develop novel electrostatic micro-power generators using switchless architecture to achieve low cost, small footprint, self-sustained and optimal power generation in different vibration environments including low frequencies and amplitudes. The first electrostatic MPG uses an out-of-plane capacitive transducer. The new generator is sensitive enough to extract output power at very low base excitations. It is designed to use ready-made electret as a charging source and is therefore portable and self-sustained. Moreover, the new MPG can be configured as a wideband MPG in its impact mode of operation. A bandwidth of up to 9 Hz has been realized in this mode of operation. An improved version of the MPG is also presented that produces almost 1mW output power at a base excitation amplitude and frequency of 0.08g (RMS) and 86 Hz. Two nonlinear models developed for the free-flight and impact modes of operation of the MPG are presented to allow future analysis and optimization of the system. The second electrostatic MPG uses a novel interdigitated in-plane parallel plate electrostatic transducer. The new implementation can achieve 78% more output power than the original cited implementation. The MPG is fabricated using MEMS surface micromachining. The MPG introduces a new beam suspension system in which the source voltage is unlimited by the pull-in instability and low MPG center frequency can be realized. The MPG uses charged silicon nitride as a charging source. The MPG produces 65 mV at a base acceleration amplitude and frequency of 2g and 1.1 kHz. The prototype achieves 27% less resonance frequency with only one eight the size of the previous implementation. A third electrostatic MPG architecture is introduced. The new architecture eliminates the need for restoring force elements (springs) in the MPG. The architecture can realize arbitrarily low MPG center frequency. It is suitable for both rectilinear and cylindrical structures and can be used with different vibration energy transduction methods. A prototype is fabricated and tested to demonstrate the feasibility of this architecture. The center frequency of the prototype is found to be 2 Hz demonstrating low frequency operation. The nonlinear behavior of switchless (continuous) electrostatic MPGs is further studied for optimal power operation. A consistent approximate analytical solution is developed to describe the nonlinear behavior of switchless comb-finger electrostatic MPGs. The method of multiple scales is used to develop such model. The model was found to be valid for MPGs operating under tight electromechanical coupling conditions and for moderately-large base excitations.