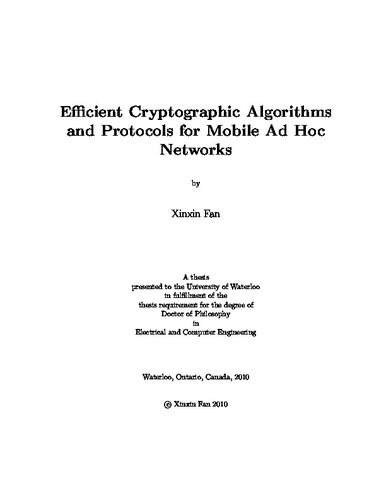 As the next evolutionary step in digital communication systems, mobile ad hoc networks (MANETs) and their specialization like wireless sensor networks (WSNs) have been attracting much interest in both research and industry communities. In MANETs, network nodes can come together and form a network without depending on any pre-existing infrastructure and human intervention. Unfortunately, the salient characteristics of MANETs, in particular the absence of infrastructure and the constrained resources of mobile devices, present enormous challenges when designing security mechanisms in this environment. Without necessary measures, wireless communications are easy to be intercepted and activities of users can be easily traced. This thesis presents our solutions for two important aspects of securing MANETs, namely efficient key management protocols and fast implementations of cryptographic primitives on constrained devices. Due to the tight cost and constrained resources of high-volume mobile devices used in MANETs, it is desirable to employ lightweight and specialized cryptographic primitives for many security applications. Motivated by the design of the well-known Enigma machine, we present a novel ultra-lightweight cryptographic algorithm, referred to as Hummingbird, for resource-constrained devices. Hummingbird can provide the designed security with small block size and is resistant to the most common attacks such as linear and differential cryptanalysis. Furthermore, we also present efficient software implementations of Hummingbird on 4-, 8- and 16-bit microcontrollers from Atmel and Texas Instruments as well as efficient hardware implementations on the low-cost field programmable gate arrays (FPGAs) from Xilinx, respectively. Our experimental results show that after a system initialization phase Hummingbird can achieve up to 147 and 4.7 times faster throughput for a size-optimized and a speed-optimized software implementation, respectively, when compared to the state-of-the-art ultra-lightweight block cipher PRESENT on the similar platforms. In addition, the speed optimized Hummingbird encryption core can achieve a throughput of 160.4 Mbps and the area optimized encryption core only occupies 253 slices on a Spartan-3 XC3S200 FPGA device. Bilinear pairings on the Jacobians of (hyper-)elliptic curves have received considerable attention as a building block for constructing cryptographic schemes in MANETs with new and novel properties. Motivated by the work of Scott, we investigate how to use efficiently computable automorphisms to speed up pairing computations on two families of non-supersingular genus 2 hyperelliptic curves over prime fields. Our findings lead to new variants of Miller's algorithm in which the length of the main loop can be up to 4 times shorter than that of the original Miller's algorithm in the best case. We also generalize Chatterjee et al.'s idea of encapsulating the computation of the line function with the group operations to genus 2 hyperelliptic curves, and derive new explicit formulae for the group operations in projective and new coordinates in the context of pairing computations. Efficient software implementation of computing the Tate pairing on both a supersingular and a non-supersingular genus 2 curve with the same embedding degree of k = 4 is investigated. Combining the new algorithm with known optimization techniques, we show that pairing computations on non-supersingular genus 2 curves over prime fields use up to 55.8% fewer field operations and run about 10% faster than supersingular genus 2 curves for the same security level. As an important part of a key management mechanism, efficient key revocation protocol, which revokes the cryptographic keys of malicious nodes and isolates them from the network, is crucial for the security and robustness of MANETs. We propose a novel self-organized key revocation scheme for MANETs based on the Dirichlet multinomial model and identity-based cryptography. Firmly rooted in statistics, our key revocation scheme provides a theoretically sound basis for nodes analyzing and predicting peers' behavior based on their own observations and other nodes' reports. Considering the difference of malicious behaviors, we proposed to classify the nodes' behavior into three categories, namely good behavior, suspicious behavior and malicious behavior. Each node in the network keeps track of three categories of behavior and updates its knowledge about other nodes' behavior with 3-dimension Dirichlet distribution. Based on its own analysis, each node is able to protect itself from malicious attacks by either revoking the keys of the nodes with malicious behavior or ceasing the communication with the nodes showing suspicious behavior for some time. The attack-resistant properties of the resulting scheme against false accusation attacks launched by independent and collusive adversaries are also analyzed through extensive simulations. In WSNs, broadcast authentication is a crucial security mechanism that allows a multitude of legitimate users to join in and disseminate messages into the networks in a dynamic and authenticated way. During the past few years, several public-key based multi-user broadcast authentication schemes have been proposed in the literature to achieve immediate authentication and to address the security vulnerability intrinsic to μTESLA-like schemes. Unfortunately, the relatively slow signature verification in signature-based broadcast authentication has also incurred a series of problems such as high energy consumption and long verification delay. We propose an efficient technique to accelerate the signature verification in WSNs through the cooperation among sensor nodes. By allowing some sensor nodes to release the intermediate computation results to their neighbors during the signature verification, a large number of sensor nodes can accelerate their signature verification process significantly. When applying our faster signature verification technique to the broadcast authentication in a 4×4 grid-based WSN, a quantitative performance analysis shows that our scheme needs 17.7%~34.5% less energy and runs about 50% faster than the traditional signature verification method.