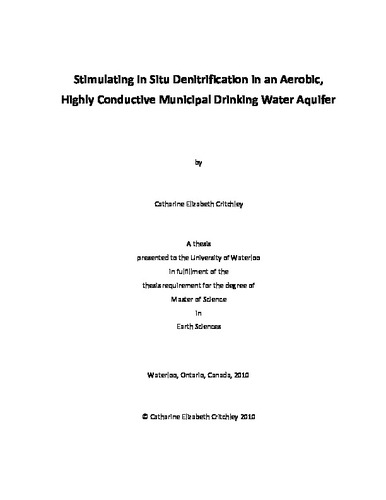 Best or beneficial management practices (BMPs) are often relied upon as a mitigation strategy for nitrate contamination throughout Canada. At a regional scale, reducing the quantity of nutrients applied to agricultural land is one BMP approach that has been implemented internationally. While these BMP strategies have been proven to successfully reduce the environmental impact of agriculture on water systems, the time interval between BMP implementation and a noticeable improvement in groundwater quality can be quite extensive. This lag time has been observed at the agriculturally impacted Thornton Well Field in Oxford County. Despite seven years of significant reductions in fertilizer application within the capture zone of this municipal well field, declining nitrate concentrations have yet to be observed in the production water wells. In order to accelerate nitrate reductions at the Thornton Well Field, an integrated approach, combining BMPs with a stimulated in situ denitrification strategy, was implemented. This research focused on the use of a cross-injection scheme to stimulate in situ denitrification within the production aquifer units, up-gradient of the Thornton Well Field. Briefly, this strategy involves injecting a carbon source and electron donor into a high flux aquifer zone using an injection and extraction system positioned perpendicular to the regional flow field. Through altering the geochemical conditions, the injections stimulate indigenous bacteria to reduce harmful nitrate to innocuous dinitrogen gas. The main objectives of this research included: characterizing the hydrogeologic and geochemical properties of the target aquifer; pilot scale testing of the proposed in situ denitrification system; and suggesting an approach for up-scaling to a full-scale treatment scheme capable of remediating the elevated nitrate concentrations at the Thornton Well Field. Core logging, electrical resistivity studies, several methods of hydraulic characterization, tracer testing, and three-dimensional groundwater modelling were used to quantify the physical properties of the target aquifer and to develop a hydrogeologic conceptual model of the site. The aquifer unit was found to be unconfined in the experiment vicinity, consisting of a complex system of six main hydrostratigraphic layers of sand and gravel featuring variable hydraulic conductivity (K) values. Despite the hydrogeologic complexity, the geochemical properties of the aquifer were relatively uniform with depth. Anion, cation, alkalinity, pH, dissolved oxygen, and nitrous oxide data all contributed to this conjecture. Of particular interest, however, were the elevated dissolved oxygen concentrations, which rivalled atmospheric saturation throughout the entire aquifer sequence. The background physical and chemical characterization identified two main challenges that would potentially influence the performance of the in situ denitrification process: stimulating uniform denitrification in the fast flowing, complex aquifer system and overcoming the elevated oxygen concentrations to achieve the necessary anaerobic conditions. Following the initial site characterization phase, several preliminary cross-injection experiments were designed and performed. These experiments featured an injection-extraction circulation cycle which spanned five metres and was operated normal to groundwater flow. Acetate was selected as the electron donor and carbon substrate. The first test involved a single acetate injection followed by an extensive period of groundwater sampling. Unfortunately, this initial test provided no indication of stimulated in situ denitrification. All anion, cation, and nitrous oxide concentration and isotope data collected during and following this injection remained within the range of background estimates. Following the first injection experiment, a subsequent test involving multiple, repetitive acetate injections was implemented to overcome the highly aerobic nature of the aquifer and support the growth and reproduction of denitrifying bacterial populations. The second injection phase included 19 individual injections that were operated at intervals of every day to every other day over a total period of 26 days. These injections successfully lowered the dissolved oxygen concentrations within the target aquifer to an average range of 0 to 4 mg/L. The least conductive layers featured the lowest oxygen concentrations, while the higher K layers maintained elevated oxygen concentrations. The nitrite, nitrate, and enriched NO3-15N and NO3-18O isotope data suggested a high degree of stimulated denitrification in the least conductive layers and a limited degree in the high-K layers. The lower-K units corresponding to multi-level well ports ML7-2, ML7-5, and ML7-6 achieved a 46 percent reduction in nitrate, while the layer represented by ML7-1 attained a 100 percent reduction in nitrate. Alternatively, due to the constant influx of dissolved oxygen and limited residence times, very little denitrification was observed in the fast flowing layers corresponding to ports ML7-3, ML7-4, and ML7-7. Overall, a percent reduction, in terms of nitrate mass crossing the 5-m wide treatment lens, of only eleven percent was calculated. These results clearly demonstrate that the K-profile had a significant impact on stimulating in situ bioremediation. Two major system challenges were observed, including an inability to successfully stimulate denitrification within the highly permeable layers and the generation of harmful nitrite at nearly all aquifer depths. Based on these significant challenges, it was concluded that additional experimentation is required before this remediation technique can be expanded to a full-scale in situ treatment scheme. The most significant recommendation requested the development and execution of a third injection phase, consisting of multiple, consecutive substrate injections designed to systematically test various pulsing intervals, injection concentrations, and electron donors. Despite the current limitations, this approach has great potential. It is believed that with additional research, the in situ stimulation of denitrification could be used to successfully reduce the elevated nitrate concentrations at the Thornton Well Field.