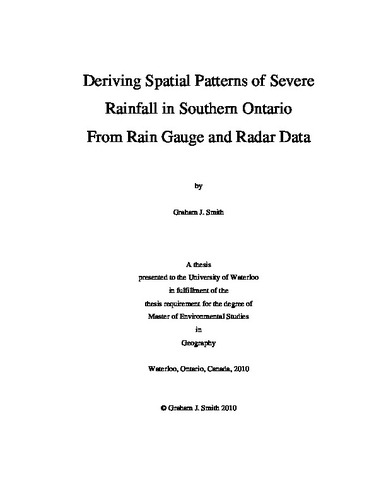 Severe weather is a natural product of the earth’s atmosphere. Water delivered by storms sustains important biophysical functions whereas from a human perspective severe weather can have negative effects when damage is caused to material assets and health. Modern society has acquired knowledge and technological know-how to deal with the effects of severe weather on human activity. In Canada storm water management infrastructure and land management practices reflect decades of analysis of weather data. In Ontario the engineering of storm water management infrastructure has assumed a long term climate ‘normal’ to guide specifications for safely operating during severe storm events. Water resource managers also consider long term climate records to guide decision-making for water use and allocation. However, given the measured and predicted effects of global warming, climate normals generated from data from the past may not be suitable for planning for the climate of the future. From the Fourth Assessment by the Intergovernmental Panel on Climate Change it is generally accepted that one of the predicted effects of climate change will be shifts in the intensity, the frequency and the spatial distribution of severe storm events. Human activity in regions affected by these changes will be required to make adjustments to their water and land management practices and to make better strategic decisions about the use of existing knowledge and technology to adapt to change. The climate in Southern Ontario is expected to shift to earlier snow melt, earlier spring storms and increased storm severity throughout the summer season. The region is particularly vulnerable to the combined effects of these climate parameters in the spring months of March, April and May when the risk of flooding and erosion is at its greatest. The predicted increase in summer rainfall intensity will have negative impacts for soil erosion and flood damage. This paper presents an analysis of 46 years of climate data in Southern Ontario. The spatial distribution of intense rainfall is examined to determine the extent to which rainfall exhibits localized patterns and whether there have been changes in the patterns over the period of data. The spatial patterns of severe rainfall between the months of March and September are also examined with the use of 13 years of radar data. A comparison of one hour rainfall measured from NEXRAD radar data to Environment Canada’s intensity duration frequency (IDF) data demonstrates a technique of spatial analysis that could aid in revising IDF values and indentifying areas that experience a higher frequency of intense rainfall events.