Gone Critical: Towards A Co-Creative Encounter with the Book 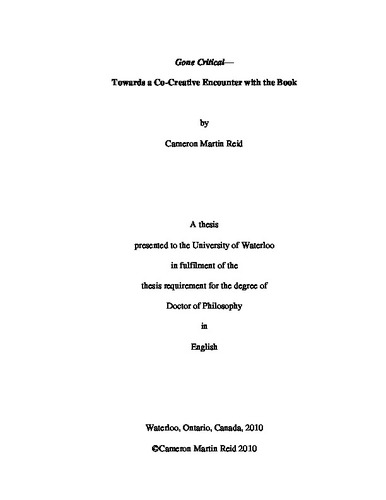 This dissertation follows two interrelated lines of inquiry. The first, I formulate as follows: (1) How, historically speaking, has the discourse of literary criticism thought the book? How has it represented the book? Used the book? Put simply, what has the book become in the hands of the critic? Though, of course, answers to such questions will vary widely—especially as they intersect with related matters concerning the critic, herself, and what Henry Sussman refers to as the perceived “task of the critic”—it is my contention that the discourse of literary criticism remains unified by its inability to extricate itself from what I call the transcendent orientation to literature: an orientation that has both ancient and modern coordinates. In Part 1 of the dissertation, I map criticism’s ongoing historical affair with transcendence—an affair that begins as far back as the Platonic dialogues, but that can be traced right up through the twentieth century, in and through the work of any number of critics, and many prominent schools of literary critical thought. I, then, formulate the second of my two lines of inquiry as follows: (2) How might the materialist critic, imbued by Deleuzean sensibilities, think the book anew? And, by extension, how might the materialist re-think the role or task of the critic? In Part 2, I shift the focus from the transcendent to the immanent (or immanentist) orientation; that is, from the logic of representation to what philosopher Gilles Deleuze—a prominent voice within this dissertation—labels “the logic of sensation”; also, from fixed essences (i.e., fixed laws, identities) to potential powers; from being to becoming; from the regulated and scientized practices of the institutional critic (spawning predictable results) to the “co-creative” encounters of the critic-artisan (unleashing pure potentials from the book). In short, Part 2 of the dissertation explores the question of how the book opens up to its own becomings—i.e., its own difference, its own transformation. To that end, I will enter into a number of co-creative relations of my own with various works of American literature (including, Kerouac’s On the Road, Melville’s Moby-Dick, Whitman’s Leaves of Grass, Stephen Crane’s The Red Badge of Courage, and William Gass’s On Being Blue).