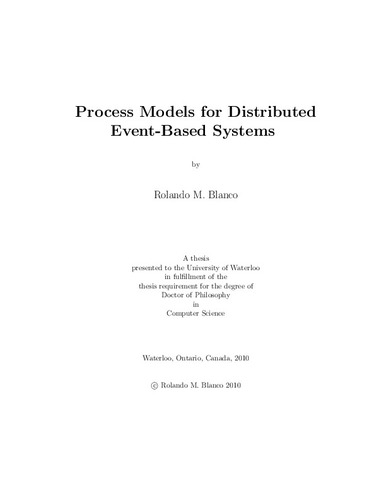 Distributed Event-Based Systems (DEBSs) are middleware supporting the interaction of publisher and subscriber components via events. In DEBSs, the subscribers to be notified when an event is announced are decided at run-time without requiring publisher components to know the name or locations of the subscribers, nor the subscribers to know the name or locations of the publishers. This low coupling between components makes DEBSs suitable for applications with a large or unpredictable number of autonomous components. The development of applications in DEBSs is an ad hoc process poorly supported by current software engineering methodologies. Moreover, the behaviours exhibited by these systems and their applications are not well understood, and no suitable models exist where these behaviours can be described and analyzed. The main concern of this thesis is the development of such models. Specifically, we develop formalisms and models supporting the specification, prediction, and validation of the behaviour exhibited by the middleware and the applications executing on it. Our main contributions to the area are: new formalisms for the representation of DEBSs and their applications, and for the specification of both, system and application properties; a categorization of the features related to the definition, announcement, and notification of events in DEBSs and, in general, event-based systems; models representing the categorized DEBS features; case studies detailing models and properties for specific systems; a prototype tool for the verification of DEBSs and applications. The formalisms developed expose the location of the actions in the modelled systems and support the specification of several forms of location-awareness and adaptive behaviour.