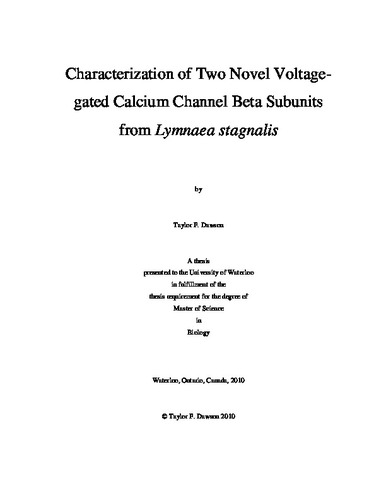 In excitable tissues, voltage-gated calcium channel activity is critical in the linkage of electrical stimuli to physiological responses, and so modulation of calcium channels therefore has significant implications. The exact mechanisms of calcium channel modulation and membrane expression, however, remain elusive. Previous work suggests that the calcium channel β subunit (Cavβ) modulates the expression and biophysical properties of the pore-forming α1 subunit. Previous research has shown that the core domains of Cavβ subunits are highly conserved, although alternative splicing in the highly variable N-terminus and HOOK regions is commonly observed in invertebrates, teleost fish and mammals. Splicing in these regions can produce unique isoforms that differentially modulate the membrane trafficking and gating properties of high voltage-activated calcium channels. With this in mind, two novel isoforms of an invertebrate Cavβ subunit have been identified and cloned from the pond snail Lymnaea stagnalis, which contain a novel N-terminus not previously identified. In addition, one of these novel isoforms excludes an optional, short exon in the HOOK region of LCavβ. Intron sequencing and amino acid alignments of the variable N-terminal and HOOK regions with mammalian and fish homologs have revealed that the genomic structure of Cavβ subuinits is conserved, despite the divergence in sequence and function between genes and splice isoforms. It was determined that the previously characterized LCavβ isoform, as well as the two new isoforms, can act to fine-tune calcium channel activity by modulating the membrane expression, voltage-dependencies of activation and inactivation and gating kinetics of invertebrate homologs of L-type (LCav1) and neuronal (LCav2) calcium channels. It is hoped that broadening our knowledge of simplified invertebrate calcium channels, like those found in Lymnaea, may advance our understanding the workings of our own highly elaborate and dynamic calcium channel complexes, and the nervous system as a whole.