The Legacy of 48 Abell: Tales From A Gentrifying Neighbourhood 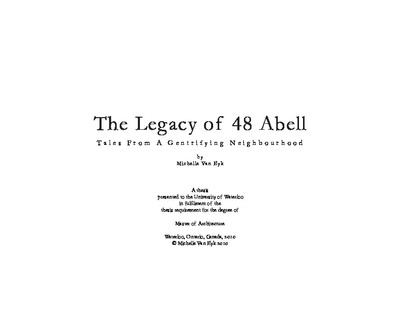 Constructed in 1886 by Mr. John Abell, the former engine and machine works factory at 48 Abell Street is located near Queen and Dufferin Streets in Toronto, Ontario. This 100,000 square foot heavy timber and red brick building has housed approximately 80 live/work studios since the 1980’s. Recently, rapid gentrification and intensive development proposals in the West Queen West neighbourhood have threatened its existence as an authentic artistic incubator. In a series of chronicles, this thesis documents the history of John Abell and the neighbourhood surrounding his former factory from the late 19th century to present day. Woven into this narrative are the author’s own stories of living in a loft at 48 Abell Street, observing the transformation of the neighbourhood and responding to potential eviction from her home. When the community rallies to the building’s defense, 48 Abell becomes the central figure in a battle over land development with the City and real estate developers in which the key issue is the cultural value of heritage buildings and protection of live/work spaces. Research in the form of mapping and data collection shows the concentration of the arts in the area known as the Queen West Triangle has been a catalyst for gentrification. The resulting displacement of arts production space and low-income residents due to escalating land values is an unintended and sobering reality challenging the current orthodoxy of ‘creative city’ movements in North America.